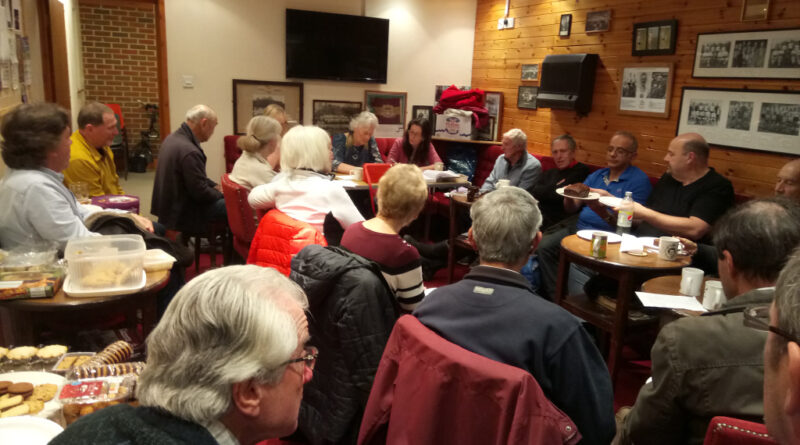 Thank you Secretary Fran for so quickly producing this summary of last Sunday’s AGM.

My first year as club captain has been very eventful we lost two long serving members this year,first Bryn Tully who was racing secretary before me & also kept the club colours active in local time trials along with his son Richard,his passing was a big shock to club members who knew him. Then a few weeks later we said goodbye to john Turnbull. Both very sad days for the club,but they bought the club together with many members ,past & present chatting about how both men had enlivened there lives with many stories passed around the one about Bryn & the Hells angels was hilarious.

When I took over from Tom V as club captain I had a few new ideas on how the club could evolve in the future.These were not always popular! There was a problem with riding standards as we all know riders had varying abilities. These we have in the main addressed via two track days where riders learnt better bike control & group riding you have to talk to each on track to stop gaps opening & when overtaking this was not happening enough on club runs Talk to each when overtaking or getting dropped off the back.With the help of the Tuesday run leaders we have addressed the imbalance of riding groups & split the groups into various speeds,this needed to be done for the good of all concerned,we now stop a lot less at junctions waiting for riders.

We have learnt from Tuesdays & have now set up a similar group riding pattern for Sundays.The Thursday group is ticking along nicely with varying numbers. One thing with have been doing is using a rolling paceline with all riders taking a turn on the front with all riders using the same signals when changing positions this way everyone gets to learn the lead roll & the backstop roll .I would like a steady ride set up for Thursdays too but need at least two leaders to organise this it may also take pressure of the Tuesday groups.

We did have a lack of run leaders & this is being addressed with Sue,Sally,Tim,Bob G,vGeorge,vFran,vJulia & Denise leading when they can. One of the changes I made was to have just one stop on Sundays which means we ride a bit further to lunch in summer or have a late breakfast in winter.We also started to ride a bit further into Kent in the summer. I added a few new venues this year with the New inn Send a nice pub by the canal, the pub with no beer the local hunt had drunk them dry the day before the Bell in Smarden food was great so we will return next summer, The Boathouse at west Moseley & fat boy slims cafe at Hove Lagoon.I have a few new venues to try next summer too.

We have tried to address rider safety with ride leaders taking riders mobile details at the start of the run & trying to keep contact with lost riders via what’s app rider update.One thing we all need to do is carry your mobile & if you have a smart phone join the Anerley what’s app groups.Riders now carry ID with next of kin contact details if you at present do not do this please carry some.With the help of Tina about 20 of us recently attended an emergency first aid course which went well & will benefit all of us in the event of a problem. I would like a few more riders to try a time trail next year or join us in a local sportive Vivienne will be keeping riders up to Date with the up coming sportives via the website & Facebook. Having looked at George’s list we now have 80 members so the club has really grown over the last 4 years.With the new practices in place we should be able to cope with the varying numbers & abilitys.So let’s all support each other both on the road & off we are one family & look forward to a great new year for Anerley Bicycle Club.

After low key beginnings a couple of years ago The Saturdays has now become a fully-fledged and increasingly popular club ride with anything between six and a dozen or more riders each weekend. All are welcome and we’ve seen many members try us and return for more.

There are still a couple of urban myths to dispel.

1). Some believe us to be mostly Off road.
Actually we go off road about once every couple of months. All other rides are on road.
Off road rides are publicised well in advance and have proved popular with 15  riders turning out on one ride in early summer.

2) Others have thought it is a fast ride.
Far from it we are about the pace of a Tuesday steady ride. We are particularly strict that no one gets dropped.
This is easily assured as the ride leader is usually the slowest.

Stuart has now introduced his Saturday slingshot which offers a longer ride heading onward after the tea stop while others head home.

Ride distances are 50 to 60 miles in the summer and up to 40 miles in winter months. Stuart’s slingshot heads toward the ton.
Off road is generally 25 miles or so and for those who have yet to try it we have some amazing cross country routes for you to discover.

Many thanks to Roger and Karen for stepping in to lead on several occasions.

Also thanks to all who have taken part in the Freeride London event marshalling. We have now led this for three years raising £1,200 for disadvantaged Childrens’ charities.

Vince deserves special mention in despatches for organising and leading a huge group of 80 or so riders from Croydon.

The Sutton route was more manageable with 30 riders along the picturesque Wandle Way.
We’ll be looking for volunteer Marshalls next July.  It’s a rewarding way to give something back to cycling and raising money for deserving causes.

And finally, thinking ahead to 2020, here is our wish list.

This is a summary of the Tuesday Rides from December 2018 to November 2019. Since July 2017 I have been producing the Tuesday Rides programme every month. Over the last year this has changed significantly. In 2018 we were still running two rides on a Tuesday, one at 09:30 and one at 10:00. The Tuesday rides have been the most popular rides in the club for some time, but the popularity started to become a problem when sometimes as many as 30 riders turned up in total for the two rides, often with 20 plus at 10:00. This led to rides being split into two parts, with the two parts trying to stay within sight of each other, but this was not always working well, and eventually, in May 2019 we decided to run three rides every Tuesday. This has been a great success. It has been made possible because of the support we have had from people willing to step up and lead the existing and additional rides.

As far as I can see, we only failed to get a leader in advance of the ride on one occasion. The programme shows that the following people have led, this may not be 100% correct due to one or two last minute changes, cancellations etc, sometimes while I was on holiday, but should be fairly representative. Let me know if anyone hasn’t been credited with leading when they did. A few rides were cancelled due to very bad weather forecasts. Some destinations were changed on the day due to bad weather etc, and on some occasions the three rides didn’t all go to the same location. Many others helped out on the rides by acting as back markers, waiting at turns and assisting with mechanicals etc. Thank you to everyone who helped to make our most popular rides successful.

Again, according to the records, we went to the following destinations. There will undoubtedly be some differences in reality, as sometimes rides were cut short, cafes were closed etc: (The number of times we went is shown in brackets unless we went just once)

I think the following were new venues for the club: Sevenoaks Wetland Centre, Ruby’s Café Capel,

The following are due next week: Polesden Lacey, Coffee Active Ashtead (was Bike Beans).

If there are any errors let me know and I will try to correct them.

May 19th: Fran rides a very hilly 25 mile time trail brave lady i stayed in bed,she did 1 hour 33 minutes in the Addiscombe event. Also on the 19th Belinda comes out to play riding the Mayflyer sportive over 56 miles in 3 hours 48 minutes ave speed 14.7 mph this is the ladys fastest 50 mile plus ride.

May 27th: Barrie rides the Brighton Mitre 10 mile tt in 26 minutes 4 seconds can he go under 26 minutes ?.
June 2nd: a big day for the club my main target of the year the isle of mull sportive over a hilly 87 miles first two hours into a headwind & heavy rain but the sun comes out & the wind changes direction for the last few hours I did 6 hours 30 minutes ave speed 13.5 mph & 75 th out of 140 riders.Down In cambridge Vivienne rides the tour of cambridge over 103 miles in 6 hours 33 minutes ave speed 15.7 mph,a bit further south Belinda rides the Woking sportive over 85 miles in 6 hours 17 minutes ave speed 13.34 mph,& finally Barrie rides the southern counties 50 mile tt in 2 hours 29 minutes 12 seconds just over 20 mph ave.

Club riders have ridden in over 50 events this year not bad for a touring club,a very good effort by all who rode ,let’s keep it up I hope to see a few new faces on the line next year in tt,or sportives there are a few of us who can give advice with training & racing so just ask well done all.

We had a complaint from an ex-member over their personal details being on the website and in The Bugle. I did what I considered reasonable to remove any identifying material. This satisfied the ICO but not the complainant.

I must emphasise that any names that appear in both are ‘munged’ – hence Stuart G & TomTom – so we know who we are but outsiders cannot identify us. This is not just to conform to the law but for your own security (you don’t want the world to know your home is empty ‘cos you are on tour!).

Personal email addresses should also not appear either. And if you don’t want your face picture on either please turn away …

I’m banned by Facebook so I can’t do it. Do we have a FB expert who can help?

We have had a written record of the club going back over 100 years. An invaluable source of information to us all through our historians. We need to keep that going and pass stewardship of all the above to our younger members. If you know WordPress you are fully qualified. If you can use Word you are nearly there. Can we elect a deputy now?

I have to report, no progress.