As we left our house at the beginning of August, it was difficult to imagine that we would actually arrive in Marrakesh a few weeks later. This is a summary of our trip which I hope you enjoy.

Cycling to Portsmouth to catch the ferry across to St. Malo, I quickly realised I had bought too much of just about everything! Maybe I shouldn’t have packed enough conditioner, contact lenses and sun cream for 3 months; maybe 8 pairs of knickers was slightly over the top when I could wash them every day but it was too late now and I put these thoughts behind me as I struggled up the hills. It was really hot and in my diary that night I wrote “Hilly, hot and hard – what am I doing???”

France is always a fabulous place to cycle with lovely villages, patisseries where we ate lots of cakes for breakfast each day and easy camping – with grassy sites ideal for tent pegs.

Our first adventure getting off the ferry was, sadly, not such a great experience. Blindly following the GPS we found ourselves cycling down a motorway (yes very silly). As much as the traffic was hooting for us to get off, there wasn’t anywhere for us to go and eventually we could be seen climbing over the barriers. This meant taking all our gear off the bikes, then putting it all back on again the other side. Unfortunately I don’t think I checked mine properly because a few miles later, my new front pannier clip snapped in two. This was really bad news but Tim to the rescue! He superglued the two pieces together and then superglued a piece of tooth paste tube over the crack (doesn’t everyone carry this?). Not only was this ingenious but it lasted for the entire trip!! 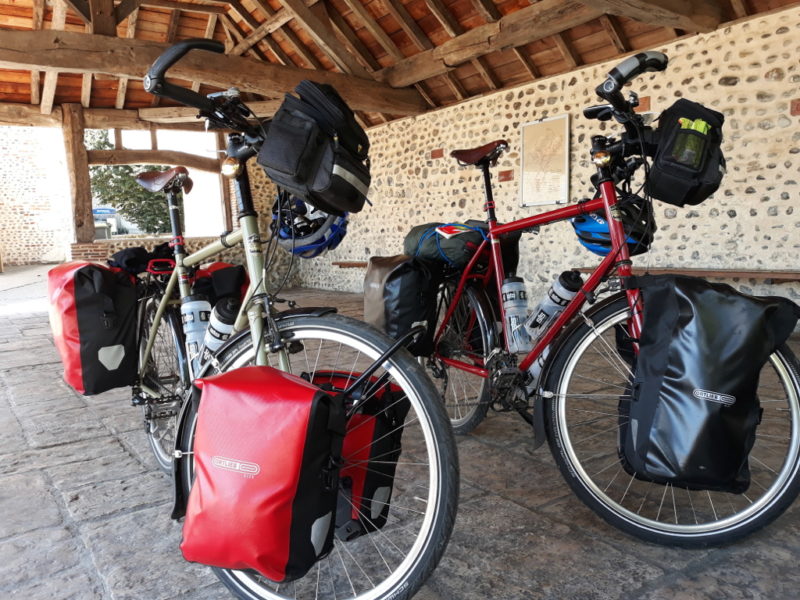 We took under two weeks to get to the Pyrenees – around 700 miles – our routine was set; up at 7, leave at 8 after filling our 3 water bottles (1 Ltr each), find patisserie around 9, shop at 12, lunch at 2 and make camp around 5. Cook our pasta, write our logs, check our gear and sleep! In the Pyrenees, we crossed not far from Lourdes at the Col du Pourtalet (1794m) into Spain. 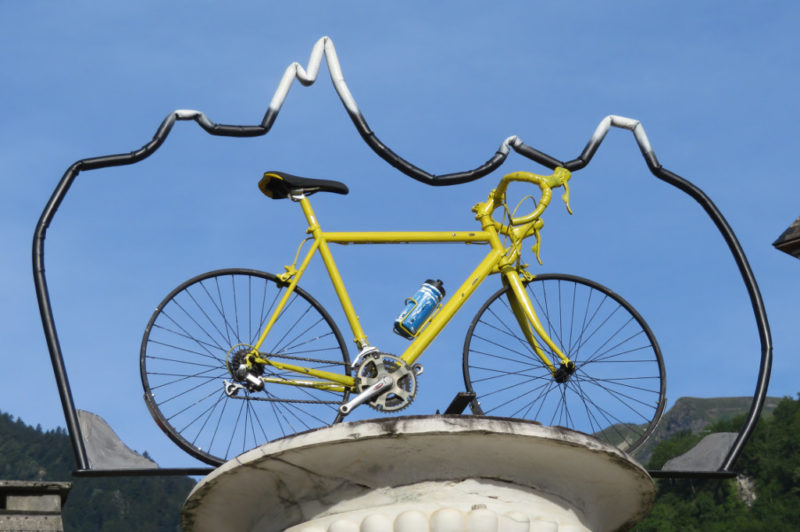 While in the Pyrenees, we took the opportunity to climb the Tour de France top; Col de Aubisque (1709m). It was a beautiful day and a lovely climb without our luggage.
Cycling in Spain was quite different – gone were the wonderful calorie indulgent patisseries, gone were the pretty lanes surrounded by greenery and gone was the language where we could, at least, make ourselves understood some of the time! 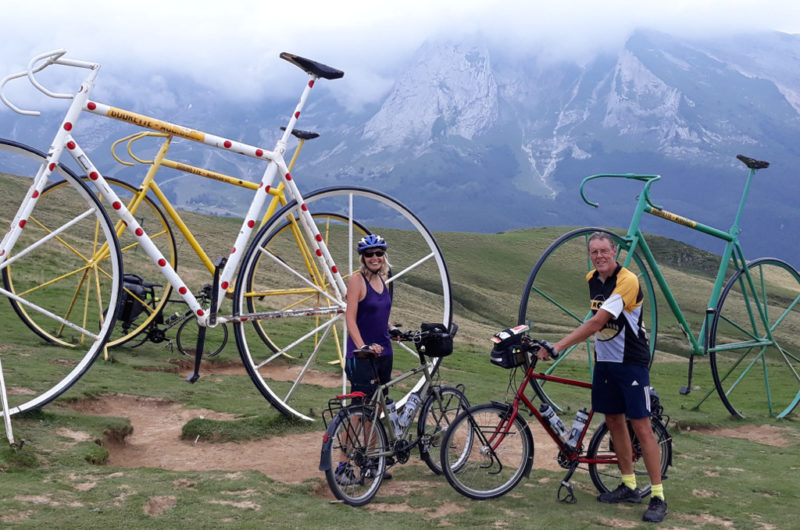 We soon got into the Spanish way of things – eating tomatoes and olive oil on toast topped with salt for breakfast. Lunch and dinner continued the same with avocado and tomato rolls for lunch and pasta with sauce for dinner – but the sauces didn’t have meat in and the bread wasn’t the baguette of France and so Tim began to lose weight at a frightening speed. Friends at home begged me to feed him more and even threatened to send out cakes for him! In truth, the cycling in Spain was hard – very mountainous and very hot. We ate as much as we could but were never going to keep up with the calories burned.

One thing to mention about cycling through Spain are the motorways. We had learnt our lesson in France and had to avoid them at all costs! However this was easier said than done. A Spanish man explained that the old roads had been turned into motorways, but as they didn’t want lots of roads running through the national parks, the old roads hadn’t been replaced. We often ended up on dirt tracks praying they would end up at the same place as the motorways. 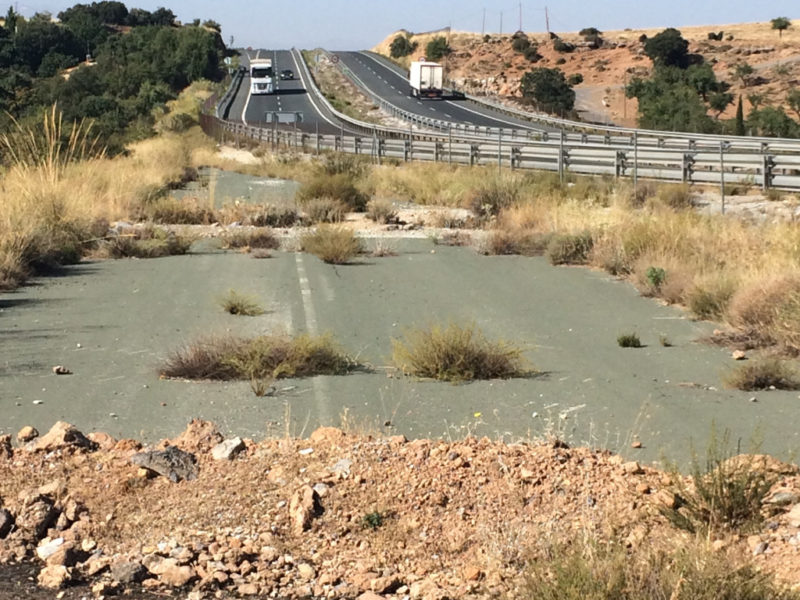 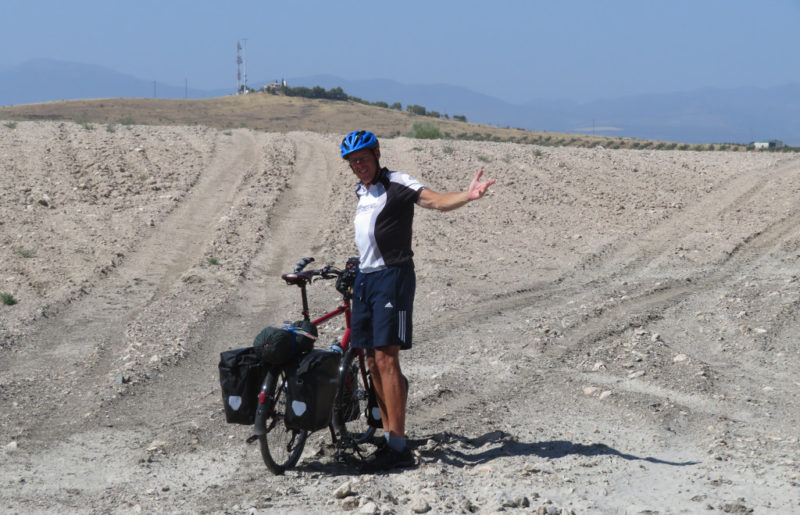 Where’s the road gone?
On the plus side the scenery was stunning. There were amazing rock formations and we cycled through many lovely old towns and villages as well as through gorges and mountain ranges. The scenery was predominately dry, almost desert like with cactus plants. We took a slightly longer route into the Sierra Nevada mountain range near Granada so that we could climb one of the highest mountains in Spain; Pico Veleta (3392m). We went up the 20 mile climb without our gear but it was still really tough. The last 7 miles are not open to traffic and the last 100 yds we had to lift our bikes up a rock strewn track. I was very grateful when we reached the top. Great views and fast descent back to the campsite! 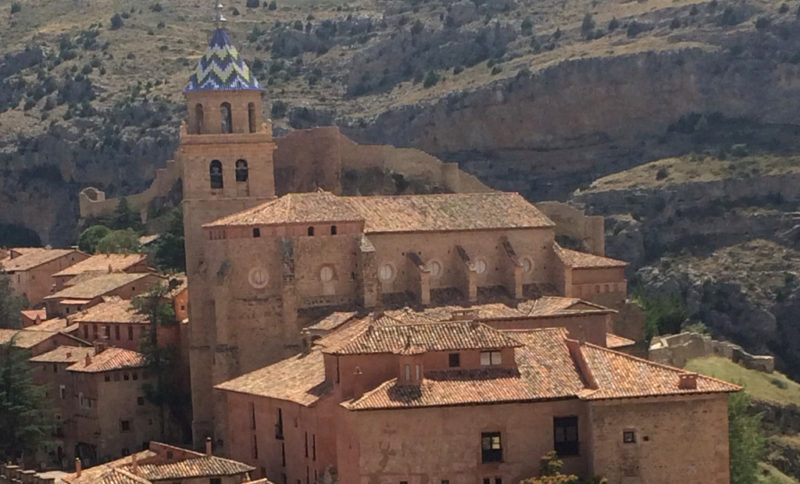 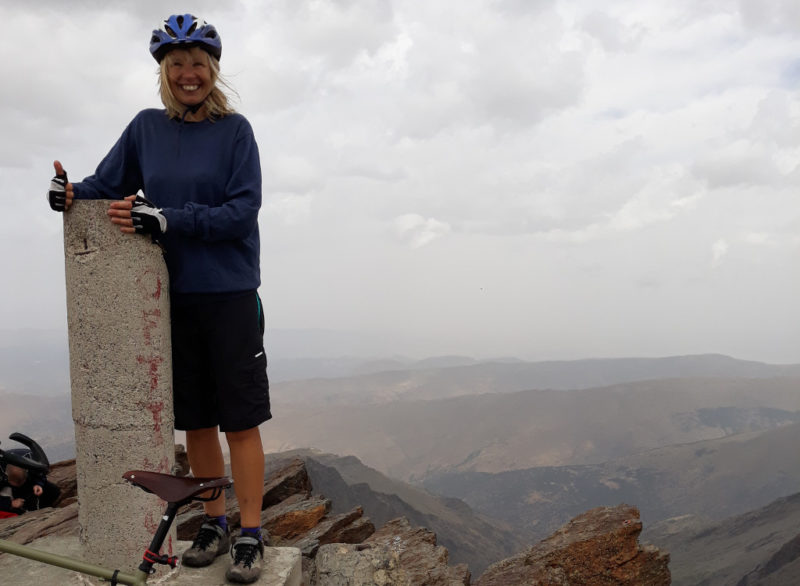 Although we didn’t see too much wildlife in Spain, we did see many Storks! They had amazing nests on top of electricity pillions and often the sky was full of them circling on the thermals above us. 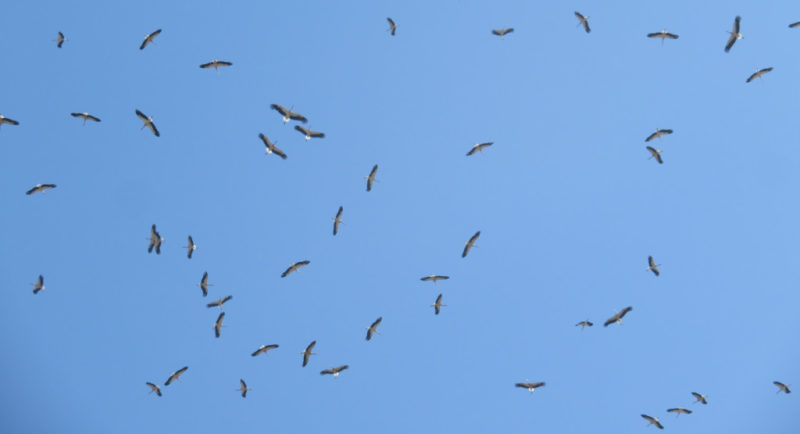 And so we came to the finish of our Spanish adventure – still no nearer being understood with our limited two words of Spanish and fairly exhausted. We took a couple of days off to eat, check the bikes and our equipment, send a few bits home and get ready for the final 1000 miles through Morocco. Tim’s rear wheel was making a clicking sound so we took it to a cycle shop. The shop couldn’t find anything wrong but took out and cleaned the bearings and the noise stopped.

Getting the ferry across to Tangiers, we were both kind of terrified of what the next few weeks would bring. Having read reports about rabid dogs, children throwing stones at cyclists and just about everyone pestering you for money, we had been extra cautious, hiding money in various different places throughout the panniers (which proved a pain when we forgot where it was hidden!) 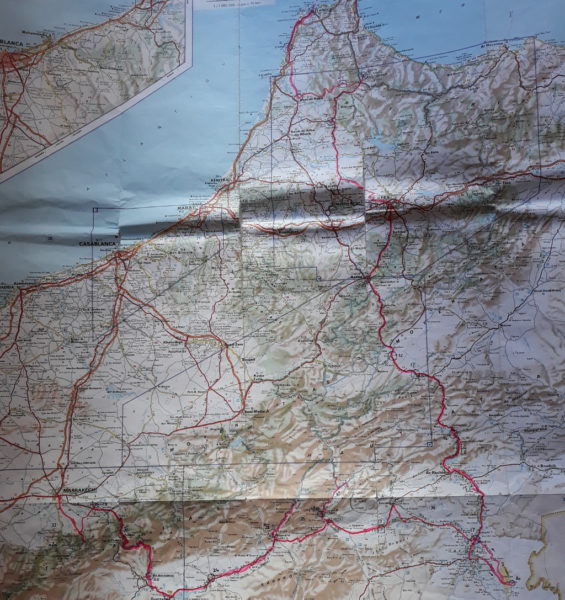 Our route through Morocco

On arrival our worst fears were immediately realised. We had booked a cheap hotel in the middle of the Medina (old market) and the little tiny alley ways were almost impossible to navigate let alone cycle. Eventually a man helped us find the hotel but at a price. Then we were told we had to leave our bikes in a “very safe place” overnight. Oh no – we didn’t want to be separated from the bikes but had no choice as we were led to a public car park. In the end we paid 7 euros for a ‘bouncer’ to look after them for the night, in his office, in the car park. I don’t think either of us slept for worrying if they would still be there the following day.

New day, and after I had hugged my bike hello, we set off. Soon we began to relax as it became clearer over the following days that the Moroccan people were really really friendly. Some of the towns were beautiful, painted blue and white. 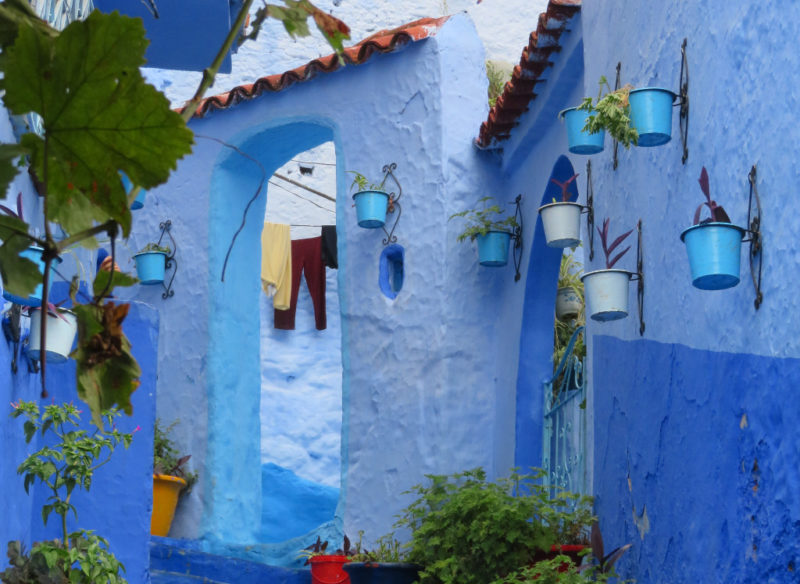 Some of the less touristy towns were less pretty but so interesting. It was a bit scary at first sharing the roads in the towns with donkeys, lorries, carts, cars, mopeds and just about any other vehicle you can think of but also great fun. We travelled South and the heat increased. At Fes we were cycling in 43 degrees. It meant that the cooler, fresher air of the Atlas Mountains was a huge relief despite being back to big climbs again. 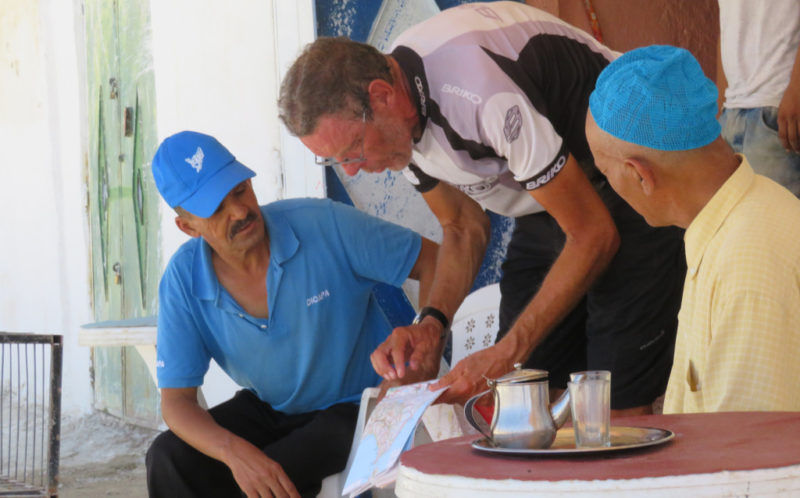 Tim enjoyed conversing with the locals 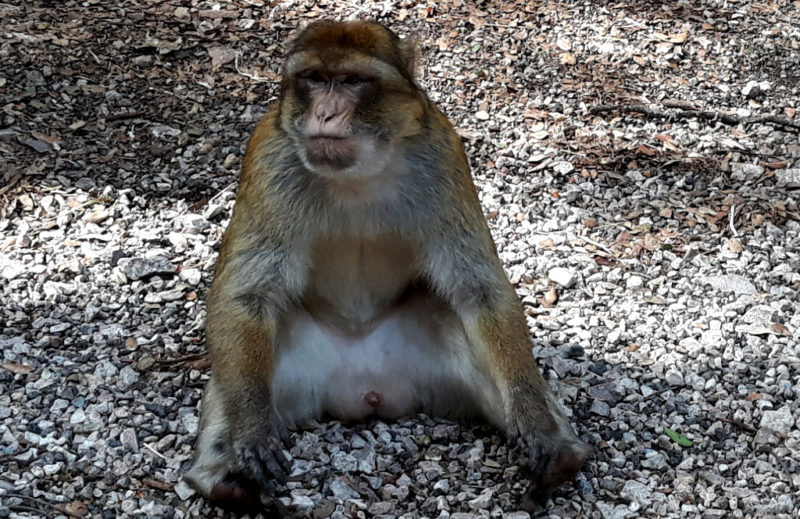 Wild monkeys in the High Atlas 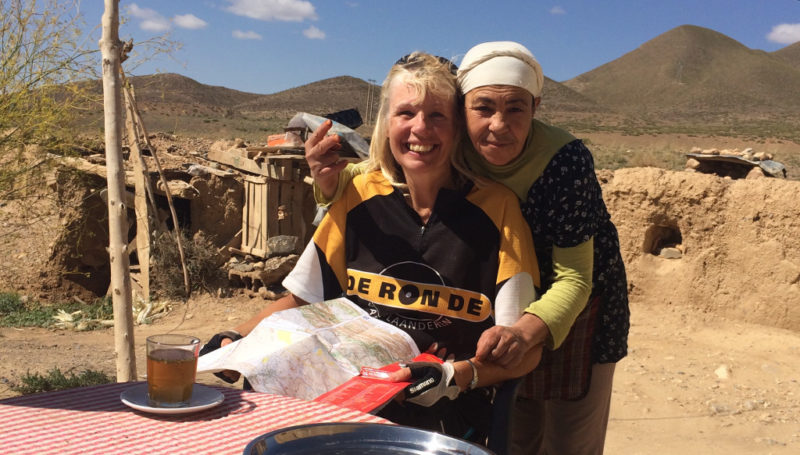 My new friend Aisha who had no idea what he was talking about!!

Once over the Mid and High Atlas mountains, which were stunning, we started to head towards the desert. This area was completely flat and with no downhills to rest our legs, often felt more tiring than the climbs. After passing some amazing Palmeries (amazing green areas in the middle of the desert covered in date palm trees) we eventually came to Merzouga where we decided to take a camel trek and spend a night in a Berber tent in the sand dunes. Amazingly, not far away it was raining and we were lucky enough to see a rainbow. The camel was extremely uncomfortable but it was a fun thing to do and we met some lovely travellers whilst watching the musicians at the tent. Tim got the worst cramp of the whole trip trying to dismount after 2 hours trekking. 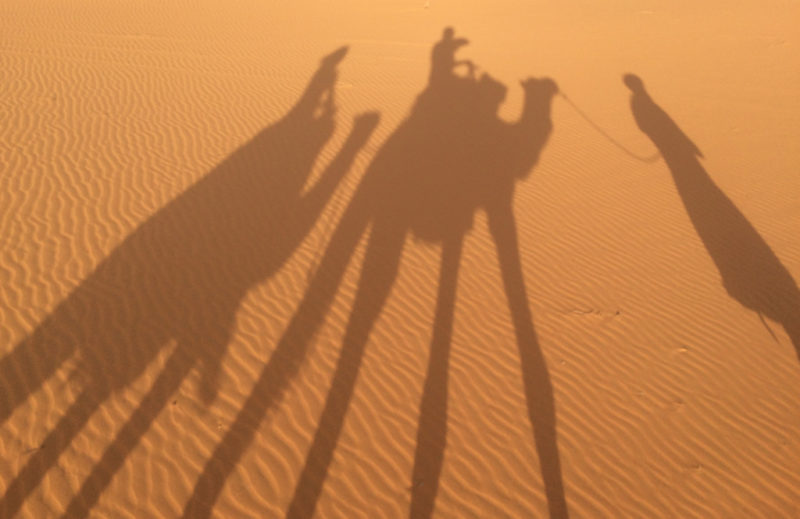 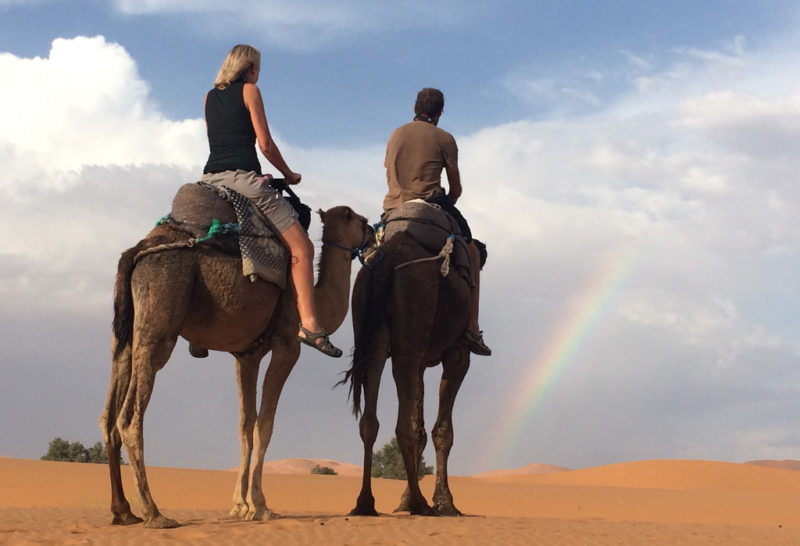 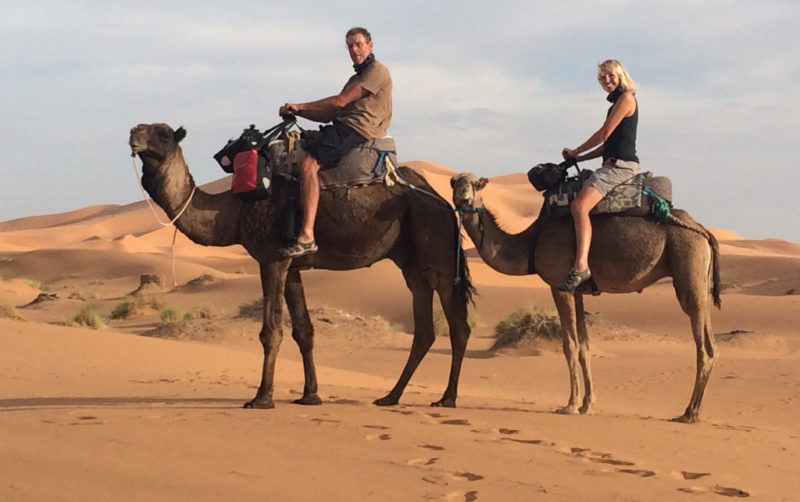 Fully appreciating my Brooks saddle after the camel, we continued west. Unusually this desert area was also the wettest we had come across – it sometimes tried to rain but only for short times and never hard enough for us to delve into our panniers to find the long lost waterproofs. Because of the rain during the night, the roads quickly flooded and our bikes, which we had recently cleaned to get all the sand off, became covered in mud. 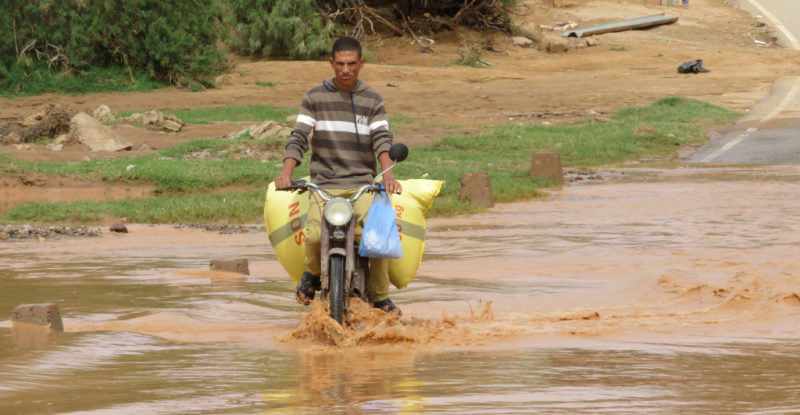 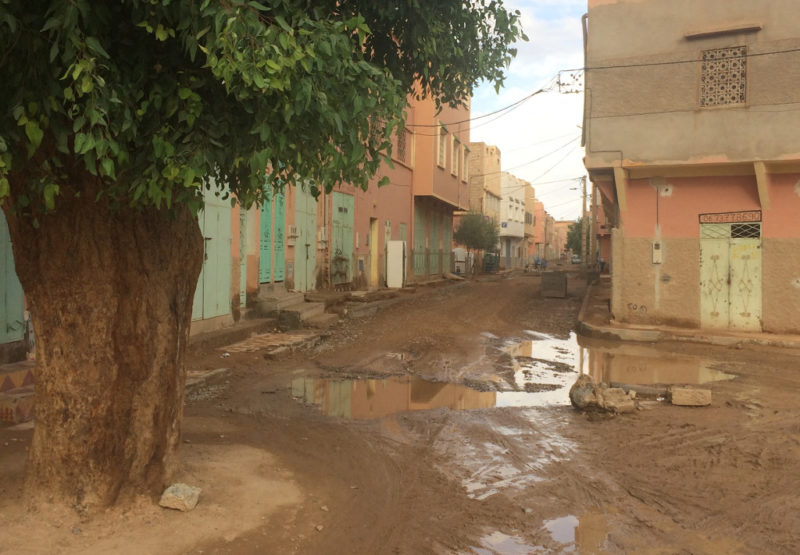 There were two spectacular gorges just off our route and we cycled up both. Unfortunately the place we were staying on the first one involved taking our bikes down a dried up river bed and crossing a river by a plank of wood – not too difficult with a normal bike but there was no way I would have managed it without the help of the hotel staff who had come down to the river to assist us. Crossing the river on a plank to reach our hotel 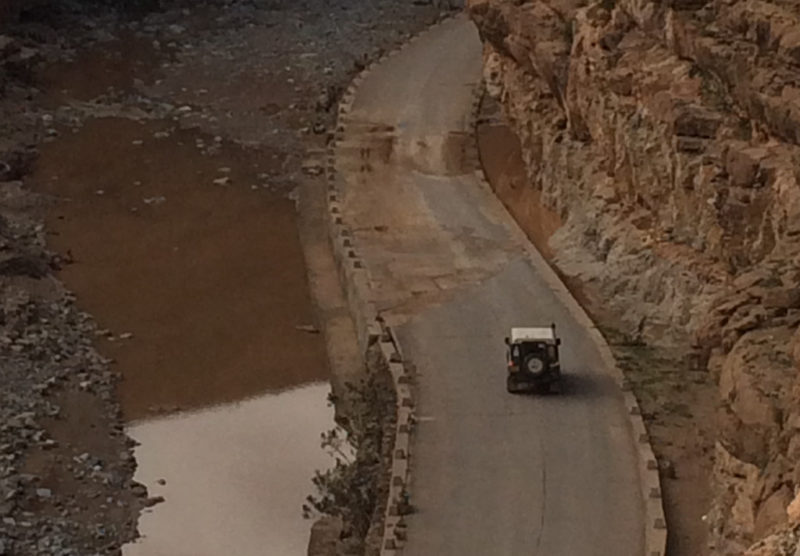 Cycling up the Gorges also involved going up mountain passes (just for the hell of it!). On the first one we were greeted by a shepherd tending his goats. It was the case everywhere in Morocco, that we were never alone. Miles from anywhere and with seemingly no reason to be there, someone would be around. Men sitting under trees or shepherds tending their goats – even women carrying loads on their backs walking miles or donkeys trotting along with their owners on their back. This particular shepherd wanted a battery for his mobile phone!

We are often asked about what the roads were like in Morocco – it was so varied – sometimes the roads were really good with a cycle path, other times the tarmac was so narrow it was impossible for two cars to pass without one going off into the gravel. When cars and lorries passed each other, they rarely slowed down so that’s when we had a few close encounters when we were the third vehicle in a row! 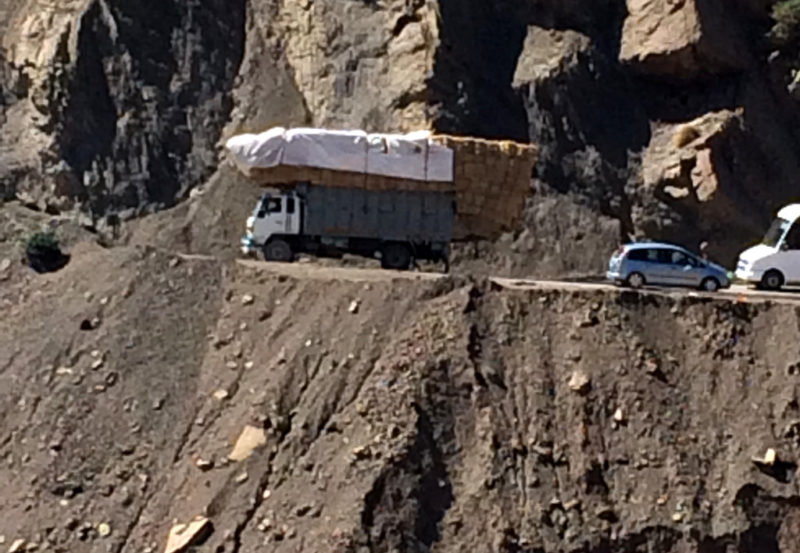 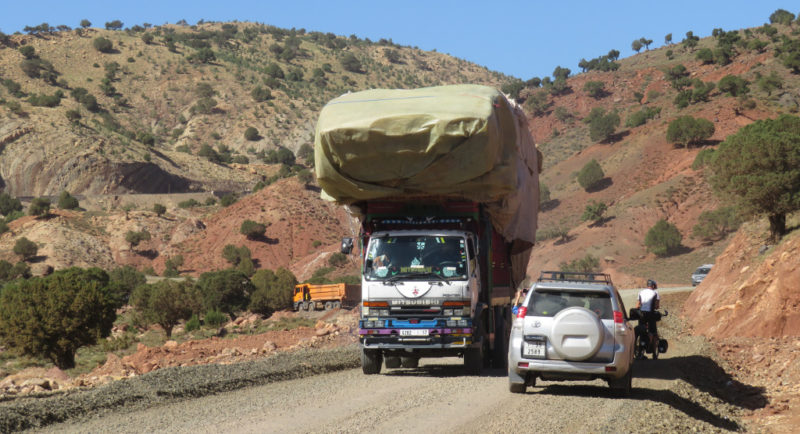 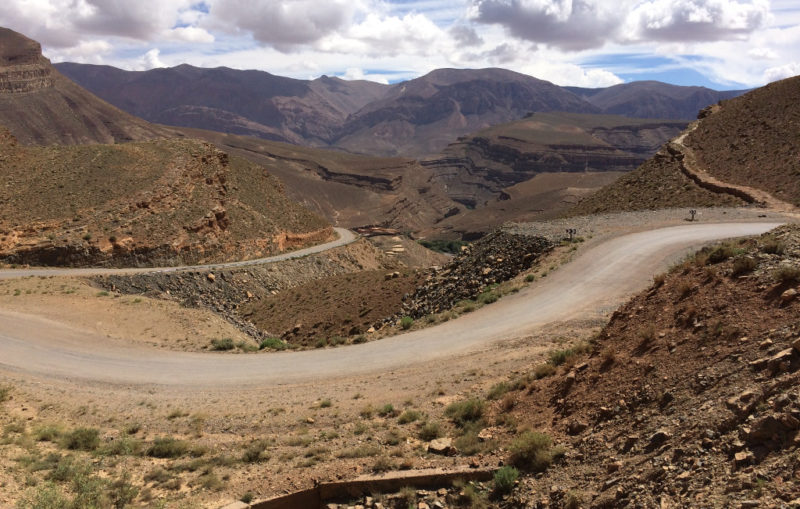 And so to the final part of our trip which involved climbing over the Col du Tichka, 2260m metres. The climb took a couple of days and we chose a back road which was very interesting and scenic, passing many Berber mud and straw built houses. The final ride into Marrakesh was back on the tourist trail and had a continuous stream of roadside shacks selling carpets, fossils and melons. 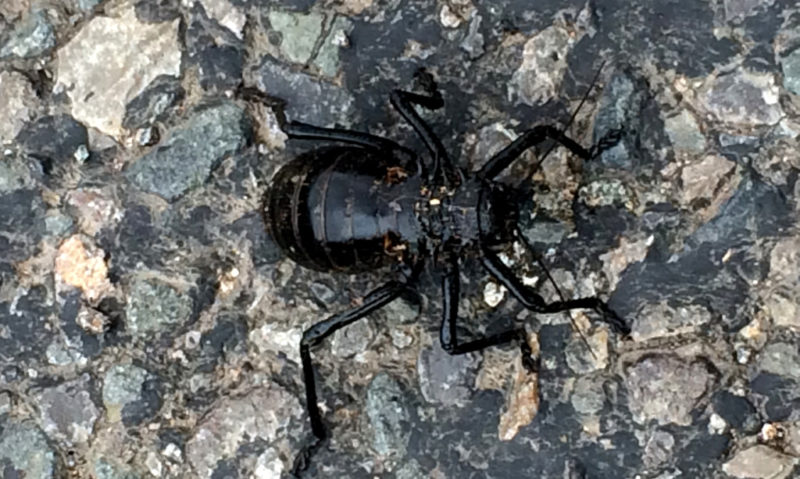 And so, 2796 miles, 3 punctures, a clicking wheel, 10 weeks and lots of smiles and tears we had made it from Carshalton to Marrakesh.