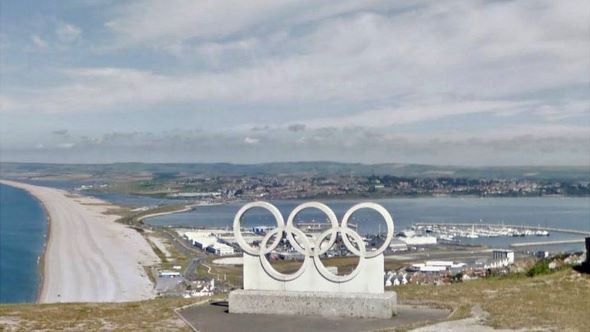 In January of this year, we were back in a strict lockdown regime. But by then the first Covid vaccinations were being rolled out. So four of us, decided to take a gamble that like in the previous year, things would get better. Hoping that at least some of the restrictions on group socialising and travel would be relaxed by August. Hence, we went ahead and booked accommodation at a sea front hotel in Weymouth. It turned out to be a great choice of location and provided everything that cyclists need. Also, because we booked when the full restrictions were in force, we got a very competitive price!

Subsequently when the last week in August arrived, we arrange to meet up at the Look Out Cafe on top of the cliffs at Weymouth, this being about half a mile from our hotel. The cafe turned out to also be a good choice and a great location.
Weymouth bay is reputed to be the largest natural harbour in the world and it’s huge area was being used for the anchorage of cruise ships, laid up due to Covid.

For centuries, the bay and Portland Harbour within it, were the main bases for the Royal Navy. Now that the R.N has about as many ships, as Anerley B.C has members, the harbour is now the U.K’s national training base for yachting, windsurfing and other water sports. It was used for these activities, when the 2012 Olympics were held in the UK.

After the promising start at the Look Out Cafe, we went to our hotel, unloaded our bikes from the cars and set off to explore a bit of Weymouth and it’s complex maze of one-way streets, dating back to the 1700s. It does however have a very good network of cycle routes, if only we could have obtained a copy of the routes map to find our way around them!
This area map is not ideal to show on our pages, which are designed to emphasize width. The map does however show National Cycle Route (NCR) 26, but scale is too small to show the myriad local cycle routes (LCRs).

From Weymouth town centre we followed NCR 26 along the road built over Chesil Beach, that leads to the the massive lump of limestone, which is the Isle of Portland. It’s limestone was not only used to form the Olympic Rings but has been exported world wide. For example, being used to build the United Nations H.Q in New York. It was also used to rebuild St Pauls Cathedral and other famous building after the Great Fire of London in 1666. What I did not know, was that Sir Christopher Wren, the architect of St Pauls, was also the Member of Parliament for Weymouth!

Having crossed over onto the Isle of Portland, we were immediately challenged by the first of 3 long and very steep climbs. See the profile below.

We had cycled just over 7k to reach the end of the road over Chesil Beach, as the profile shows. Then the road went straight up and down as we weaved our way up and down the main ridge. The second climb being the highest point at some 400 feet above sea level. It was a real struggle, being even worse than Leith Hill. But we all made it without getting off to walk up any of it.
We did however stop at the top of the second climb for 2 reasons. The first being that the steep climbs probably caused a problem. Tomtom’s chain began derailing from the smallest chain ring/largest sprocket combination at that point. After Tomtom fixed that, the second reason was this!

High security fencing at the old Portland Prison!
Over the entrance archway and stout doors behind me, is an engraved stone saying ” 18 VR 81″. The year of 1881 in the reign of Queen Victoria – and of course 1881 also being the year when Anerley B.C started riding Her Majesty’s highways! Unfortunately we could not get close enough for this engraving to be visible in the photo.
Adjacent to the prison and still visible, are the quarries where the prisoners, sentenced to hard labour, cut out the Portland stone. There is also visual evidence of the horse drawn railway, used to transport the stone down to Portland Harbour. There it was loaded onto barges for transport to places far and wide.

This “old” prison started life as the Verne Citidel – a military fortress built to defend the harbour, it being the most important asset of the Royal Navy, and hence the United Kingdom of this maritime nation. Of course, in this 21st Century world of Woke , it should now be “Queendom” as Victoria was at that time ensconced upon the throne!
Also, in this pre-woke world, there was no shortage of forced, hard labour. No slap on the wrist justice. A life sentence meant life, and hard labour, meant just that! This, the main entrance to Verne Citadel, probably had a welcome message carved into it’s arch.

There are actually 2 prisons on Portland, the “new” one still is a prison and we had intended to visit it. There is a restaurant/cafe there, open to the public. The “good conduct” convicts are the cooks/waiters, etc, gaining work experience before release at the end of their sentence. What put us off was not porridge, but it meant another steep climb, and having experienced the first we were reluctant to receive more punishing hard labour!

After our third hard climb of the afternoon, it was a more gradual descent to the far end of the island. Here we arrived at the famous Portland Bill Light House and a much welcomed tea shop that provided tea and cake!

After that it was the climbs and descents in reverse, fortunately more and steeper descents than climbs this time!

But I omitted to mention the views!
On our way up, there were several official view points, but the climbs being so steep we just kept going. Fearing that if we did stop we would not be able start again on the very steep gradients! Now, going down we could stop and from the high vantage points, enjoy the magnificent views stretching into the distance along the coast, east and west.

At the top of the middle climb, being the highest point on the Isle of Portland, on one side of the main road is the Portland Cenotaph. It was placed there with a view over Portland Harbour, Weymouth and the coast to the east, to commemorate the 237 local men who died in the Great War. Another 108 names were added for those who died in the Second World War. A significant number for the relatively small population on this Isle.

On the other side of the road, with magnificent views to the west, is a new addition to symbolise the Isle of Portland. Like Stonehenge and other symbols of man’s cultural connection with stone, this new attraction for tourists is a circle of huge stone blocks. In this case, Portland stone blocks, formed millions of years ago!

So our first day at Weymouth had been both interesting and physically challenging. Just what a cycling holiday should be, but what would tomorrow be like?
Des

P.S. For those interested in our Island history, and it’s military history, this is an interesting read https://www.portlandhistory.co.uk/verne-citadel.html
And there is more here! https://nothefort.org.uk/museum-history/history-nothe-fort-1860-1872