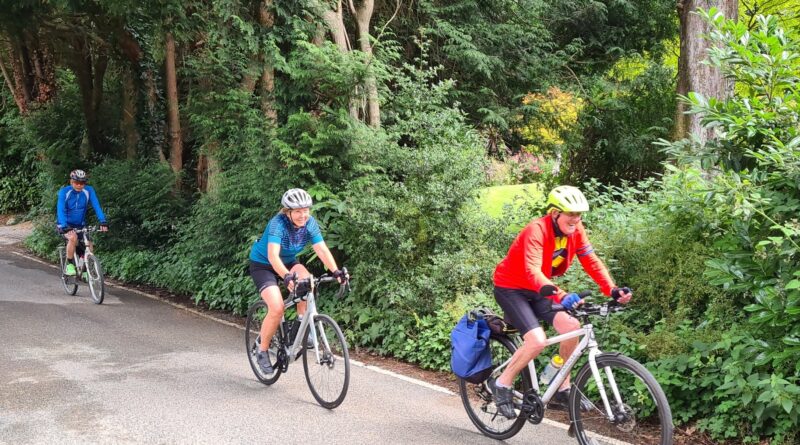 It had been a long wait, but after weeks of rain the 12 July was at last, a sunny summer’s day. A day which deserved a meander around some of the best of our country lanes, ones that I hoped our team of 5 would appreciate – Denise, Tom Tom, Ricky, me, and Shakil who acted as our photographer for the day.

We set off via Boxhill (an error as teeming with cyclists, bikers, hikers and cars!) But turning off to Pixham, the traffic subsided and the climb up the steep, Punchbowl Lane was a real pleasure in the dappled sun light. From there it did not take long to arrive at our morning tea stop beside Henfold Lake.

From Henfold we headed south, up that short 16% climb which shocks the legs after the tea stop, followed fortunately by the tree shrouded downhill into Newdigate. Continuing on, via the Surrey Cycle Way route into Capel, we came to the A24 dual carriage way. As we waited to cross, who should we spy but Capt. Mark and his team of Speedies as they exited from Coles Lane and headed north up the dual carriageway towards Dorking. They had just been to the Scarlet Arms pub at Wallis Wood, where we were now heading for. However, except for this chance encounter we were using very different routes.
Our meander continued along the Surrey Cycle Way, into one of my favourite country lanes – Weare Street – which follows the course of a little brook through woodlands. Lots of nice houses to see in Weare St, and I always stop at the one with it’s well stocked, road side duck pond! Not just ducks, but Canada geese, moorhens, also!

Continuing on our way we soon saw a lonely cyclist coming up the hill towards us. As we got closer we realised that this lonely rider was Tim Styles of Anerley B.C. Another club man who knows the best of country lanes!
Tim had been to the Scarlet Arms but Capt Mark and team had already left and Tim was trying to catch them at Ruby’s Cafe. So he sped off and we continued our meander, stopping a little further on to see what this little back route had been used for in days gone by.

So now you know what business activities paid for these lovely, old and stately homes in Weare St! The area was along an old route used by smugglers moving their contraband cargoes of tobacco, tea, brandy for the parsons and silks for the ladies, from the Sussex coast onwards to London.
We soon came to cross over the A29 – Stane Street – the old Roman road to London, which the smugglers for obvious reasons were avoiding. Arriving at Okwood Hill we left the Cycle Way and turn northwards for our return journey, shortly to pass a long time favourite of Anerley B.C at Wallis Wood.

Summertime cycling is thirsty work, so we decide on a bit if self service at the village well opposite the pub!

Wallis Wood is a very small but enchanting village at the top end of which we turned off along the winding, Stansted and Catshill Lanes to arrive back on the A29 – Stane Street – at the southern end of the village of Ockley.
Here, the 15th century Cricketers Arms, used to be another welcoming pub stop for Anerley B.C, but now it closed up, abandoned, with overgrown gardens. But at least the cricket club was still active on the village green as we cycled past!

With the village pub closed and a village pump that no longer pumps, we set off back through the village of Capel and on towards Beare Green, just short of which, was the welcoming cyclists’ stop at Ruby’s Cafe, with it’s mass of water lilies in bloom on the lake.

Here we saw the new range of puncture proof, tubeless tyres on display!