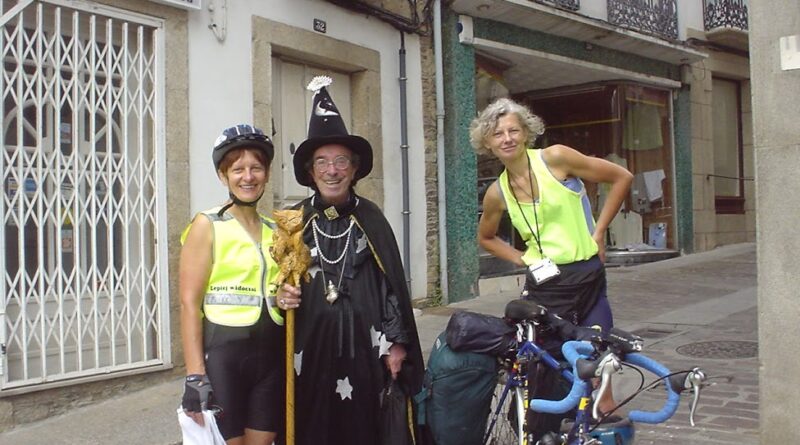 After our night’s sleep in the barn, or horreos to the locals, we started day 6 in good spirits, even though we still had damp clothing and wet shoes from the previous day’s rain.  We continued following the old coast road, the original Roman road, the Agrippan  Way, which does not appear on today’s small scale maps.  Its tortuous windings were an attempt to avoid the worst of the hills, for Spain is second only to Switzerland in having the highest average altitude in Europe.  However, since the marching feet of Roman legions and the later, plodding medieval pilgrims passed this way, the artic lorry has necessitated a dramatic change to this wooded landscape.  M-ways and concrete spans, linking hill top to hill top, which we could only view from below on the valley floors.

Our meanderings had taken us inland, and via a river valley, to Canero.  Here we stopped for a late elevenses at a pilgrim’s hostales below another concrete span.  Soon, we climbed back up on to the coastal plateau, and a further 10k brought us to a cliff top, minor road, with the sun shining on the sea and a small sandy bay below.  Rounding a headland with light house atop, the narrow road snaked down the cliff side, with magnificent views over the delightful fishing village of Luarca nestled in a cove below.

Unfortunately it was siesta time when we arrived and virtually everything was closed until 4 o’clock. There was however, a market stall in the main square, selling local traditional items. Ewa and Irena  took a liking to the strange, hand carved wooden clogs, but they were a bit too big for pedalling in toe clips!

Shortly after leaving Luarca we had no option but to cycle along the busy main coastal route, the N634, where we stopped for tortilla and cerveza.  With evening drawing in and another 15k later, we arrived at the small town of Navia with its boat building yards on the river estuary.  On the long and fast freewheel down into the river valley, we came across our first and only traffic jam. It was the start of the town’s fiesta weekend.  We stopped at a mercado (a small super market) to buy food for our evening meal at the next hostales.  No “have a nice day” here, for the shop was run by the Spanish Glum family!  Hardly a word was spoken as goods and money changed hands, and I am sure that it was here that the spell was cast, for like Lady Macbeth I was struck down by the evil eye.  But in my case, not damned spots, but Spanish tum!!! Overnight I became ill, really ill, and there was no way that I could carry on cycling in the morning.

Ewa, Irena and Yoshi spent the next morning on the beach at La Caridad, whilst I stayed in emergency mode at the hostales!  By mid-day however we had to move on, so aided by the medical attention of Dr. Irena, a real and qualified doctor, whose First Aid kit was stocked with pills and potions and her strict instructions to consume nothing but dried bread with black tea, I was hoisted back onto my saddle!

Luckily the terrain was now fairly flat all the way to Ribadeo, except for a detour down into another cove to see the small and picturesque fishing port at Tapia de Casariego.  Time for photos in the scenic harbour area, then back up into town for a visit to the open air market where we were serenaded by bag pipers whilst we surveyed the offerings of hams, cheese, wines and cider, plus other local produce. Like the Scots and Irish, bag pipes are the traditional instrument used by Asturian and Galacian folk musicians.

We left Casariego along a tarmac coastal path around it’s wide and sandy bay and took a narrow lane which led to a coastal cycle path.  However this track was deemed too adventurous for the ladies, being more suited to mountain bikes, so we returned to the main, N634 to Ribadeo.  But before crossing the long bridge over the River Deo we stopped in a river side park to admire the views over the wide estuary, and to have a picnic tea stop.  Or in my case, to enjoy my meagre ration of dried bread!

In Spain the regional governments are semi autonomous, thus the Spanish refer not to Spain, but the Spains, plural.  Crossing the River Deo we passed from one Spain, Asturia, into another Spain, Galicia.  Having covered about 200 miles, mainly following the coast, it was now time to head inland and cross the mountain range.  This starts in the east as the Pyrenees and continues in an unbroken chain through the Cantabrian Mountains into Portugal at it’s western end.  I wanted to get off the main road and follow a quieter alternative into the hinterland.  The Galicians have their own language, Galigan, so when I stopped and asked two elderly Galicians the way to Vilela in my Anglicised, Castilian Spanish, I was met with blank looks.  Ewa faired a bit better with some younger Galicians, brought up in the multi-cultural age of T.V!   However it was 17k, mostly uphill, before we saw the first road sign confirming that we were, in fact, on the correct road, the LU 133.  A quiet, scenic road, the best part of which was a long, long, long, down hill ride with fast sweeping bends through a pine forest.  A real adrenalin rush!

From Vilela it was only a short ride to the town of Vilanova de Lourenza with its modern hostales, a bargain at only 3 Euro a night!  See the building in the background with me by it’s Galician, pilgrims’ cross.

We arrived on Saturday night which was fiesta night, with fireworks, live music and dancing in the town square, followed on Sunday morning by High Mass. Spiritually renewed, it was time to set off for Porto de Xesta, a pass or gateway, over the top of this part of the mountain range.

Then we continued climbing, following the old road through woodland until we came to the small town of Mondonedo. Here the cathedral is dedicated to the English. The reason being that when Henry VIII was robbing and destroying our churches and monasteries, valuable artefacts were removed from London’s, St Paul’s Cathedral, and smuggled to Catholic Spain, ending up (and still kept) in the cathedral of Mondonedo.  As you can see, both Irena and Ewa were enchanted by this magical place – and its traffic wardens!

The going got steeper as we slowly caught up with a couple of German girls, pilgrims who had walked from Santander – God bless their soles. It had taken us 9 days – of strenuous cycling!
The girls and Ewa, having been brought up in the communist, Eastern Block, were able to converse in their compulsory school subject of – Russian!

Eventually we rejoined the main N634 at the top of Porto de Xesta and took a well earned afternoon rest at a wayside café.  Then it was an easier 15 miles on the main road to Vilalba and our next over night hostales.

Next morning, we had no alternative but to continue along the busy N634, which was blessed with a sort of cycle lane (actually built for local farmer’s donkey carts!). Ten miles took us to Baamonde where we headed due west and a new M-way siphoned off most of the traffic. At Guitiriz we turned south on to a minor road (AC 232, not shown on our small scale map), but shortly before doing so we stopped for a road side picnic lunch. Dr Irena allowed me a treat, a jar of baby food, beef and rice. Yum, yum! Unfortunately it played havoc with my tum tum!

The rest of that day’s ride was, by Spanish standards, reasonably flat.  Certainly the easiest part of our journey.   And we had some luck!

About 10 miles along the AC 232 we came to an area of smouldering and burnt out, woodland and heath, what remained after a forest fire.  Had we come earlier the fire would have made the road impassable and resulted in a very lengthy detour!

Obviously, the Magician of Mondonedo had cast a good spell, and so, on a beautiful sunny evening we arrived at our destination for the night, in the middle of nowhere, at the monastery of Sobrado de Monxes.
The monastery complex was large and extensive and the photo does not do it justice.  Here we are passing through the entrance gateway, going towards the church with the monastery quarters beyond. Note the size of our panniers.  But then a pilgrimage is supposed to be a form of penance, and cycling beats saying a dozen Hail Marys!

The monks had been welcoming pilgrims at Sobrado since the 10th century, and over the years built a magnificent monastery complex, which can only really be appreciated from this model of the vast and magnificent building.

The cloisters on one side of the main quadrangle were well fitted out as accommodation for pilgrims.  What a difference this place was to our horreos of 4 nights previous! After an evening meal in the monastery grounds it was time for pace dominum – a good night’s sleep!

And on that note, I end another part of the Anerley Pilgrimage to Santiago de Compostella.