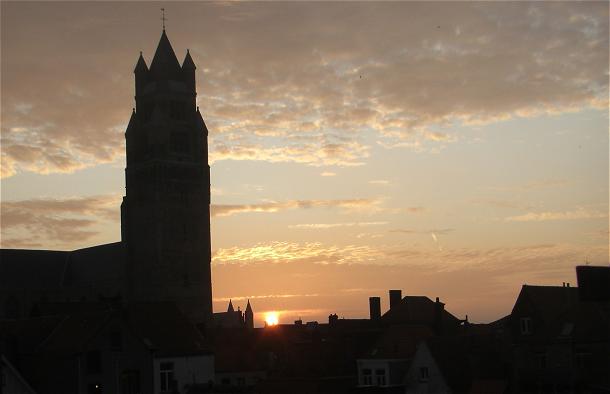 Four of us who had met up on various FNRttC rides thought we might do a FNCttC (Friday Night Cruise to the Continent). A three day mini-cycletour taking in Holland, Belgium & France.

We started Friday morning from Hyde Park Corner for the English bit – a 92 mile ride to Harwich to catch the Night Ferry to the Hook of Holland. Whilst everybody else was heading for work we headed out through the delights of Stratford and Romford before hitting countryside and our morning cafe stop in Brentwood. The sun shone, the headwind was modest and we were soon zooming through pretty Essex countryside and rather faster rate than the ABC 12mph tradition. I hung on grimly with the odd rehydration en route:

The route took us out across Mersea Island and we bypassed Colchester by taking the Brightlingsea Ferry. This is a dial-a-ride mini landing craft only reached after a trek across the sands which nicely clogged my mudguards. Thoughtfully they provide a hose on the other side …

A further nineteen miles riding into the evening brought us to Harwich. We were a little early for the boat so we repaired to the Pier Hotel to consider the meaning of life and why Essex appeared to be bereft of Abbot and we had to resort to IPA. It was also a good place to bond. Frank & Els are well established riders both completing this year’s 1200km Paris-Brest-Paris whereas Jenny and I are relative newcomers who had never attempted anything like this before.

The cycle stowage on the Stena Line ferry was very strange with a special holder for the handlebars. Frank & I were OK but the ladies with short stems needed to remove their front wheels to fit.

Upstairs the ship was magnificent, the crew could have been from the finest Park Lane Hotels and the cabins were excellent. We dined on board and celebrated Jenny’s first ‘ton’ (to include her ride to Hyde Park Corner). An early start as we had to eat before the ship docked at 7.30am with lashing of beans, eggs, bacon, sausage … which help to propel us along the river channel to our third ferry to cross to Europoort and head south.

We were soon out of the port/industrial complex and heading first across open countryside and then after crossing the Haringvlietdam into pretty countryside. This is dotted with beautiful villages completely bereft of tourists – apart from us. We took morning coffee in Goedereede in a sweet cafe where we were invited to use the special table normally reserved for card games. It was such a shame we did not have enough time to look around but with 91 miles to do on the day and dusk before six we needed to press on.

The way south was mainly along LF1: The North Sea Cycle Route. This kept us away from roads and on a high quality cycleway that snaked through woods, dunes, the coast and over some of the largest flood barrier infrastructures I have ever seen. They dwarf the Thames Barrier. The views were magnificent, the skies wonderful and all uncaptureable by camera. Oh to be a Flemish painter! More towns, more beer, more cyclists … really wonderful to be in a culture where cycling is so integrated into life. Babies on handlebars, dogs in trailers making town and village centres so civilised and open. By late afternoon we had reached Vlissingen and the end of the Dutch sea barriers. Ferry 4 was to take us the 6km across Westerschhelde to the Dutch enclave in Belgium. This was a modern fast ferry for people and bicycles. The whole main deck was just for cycles – up to 80. The picture below shows just ONE side: And so the last 25 mile evening ride across the border and onto Bruges. The sunset was unforgettable – through the autumn leaved tree lined banks of a mighty canal as we whistled along the towpath. And so into the heart of the Venice of the North. More beer was taken, splendid supper was shared and a walk through a nocturnal paradise with mist on the water, the Markt, the City Hall and churches majestic. It was a pity to have to go to bed but the final day three was going to be a hard one. The Sunday dawn was brilliant but the wind has veered 180 degrees so from Essex we had a constant headwind. Not too much trouble at first as we whizzed along more cycleways through the woods. Later we were riding hard across open unhedgerowed countryside and the going got tough as the wind sharpened. We were heading for Westvleteren, a Trappist monastery which is reputed to brew the finest beer in the world. And they do! We were served with their famous ‘8’ & ’12’ plus beautiful food. We would have had more but 12% gravity and riding a bike can be a bit problematical.

Nevertheless the infusion was sufficient to bring renewed vigour to the legs and we powered on across the border into France and our final destination, Dunkirk ferry port for the boat to Dover and train home. 75 miles on the day making 258 miles overall.