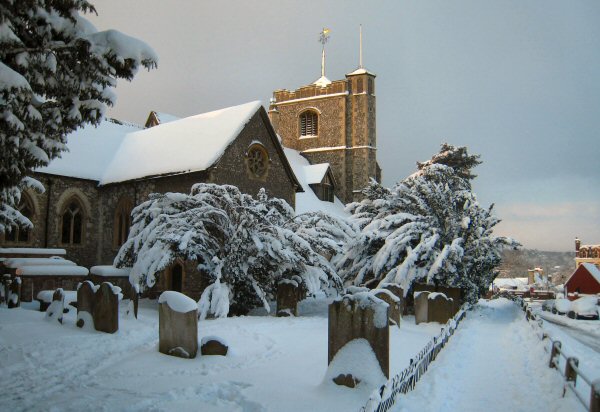 Saturday was a day of rain, torrential rain, which carried on throughout the night. By 9 o’clock on Sunday morning it was still light rain but the BBC weather forecast suggested that it would pass over by 10. And it was spot on! At 10, as Anerley’s finest assembled for the pre – Christmas, Sunday Ride, the sun came out and blue sky promised a great day’s cycling.

The Fast group and Steadies combined, with many dressed in Santa’s red, set off to Polhill with it’s Christmas market atmosphere. We the more relaxed riders, 9 in all, including another Santa and red coated helper, decided on Denbies, for a less crowded tea stop venue.

To make the most of the sunshine, we set off for a detour along some of our country lanes. Leaving Chipstead valley we took the old and original lane to Banstead. Passing the the two pubs, The Mint (as in sauce) and the Wool Pack, which are bygone memories of the shepherds who watched their flocks on the surrounding hills, just like those, who 2000 years ago, did the same around Bethlehem.
Next it was on to Epsom Downs where the famous race course was a sparkling green with the bright sunshine reflecting off the morning dew.

Then down the steep drop into Langley Vale where I was expecting an over night lagoon from the torrential rain. But no! Much to my surprise, not a drop. So we had a boost of kinetic energy to start our charge up the hill, out of the dip, to join the road towards Headley. But the rain running off the hills had to go somewhere, and soon we found out where!

From the Headley road we cut across to Leatherhead, past it’s old parish church, which perhaps, but for climate change should have looked like this!

But instead, as we free wheeled down the hill to join the cycle path to Dorking, we found that the Mole valley was flooded and the cycle path had disappeared, not under snow but water. Lots of it!

So we stayed on the road to the roundabout where we joined the A24 dual carriageway. From there we were able to join the cycle route to continue towards Denbies. A bit further on, blue and white police tape showed where the A24 had, in earlier hours, been closed due to it also having been under water.

Opposite the turn off to Michelham we stopped by the little iron bridge over the River Mole, for a festive photo and to see the river in flood!

Below us, the normal slow and meandering Mole, spread out across the the valley floor with trees half submerged.
Further on along the road, the subway which we normally use to cross under the A24, to and from Box Hill, was unusable being flooded with muddy water. But fortunately the floods did not block our path and soon we were at Denbies for a very sociable, pre-Christmas tea stop, all nine around a large circular table.

The only thing to mar our ride, was that on returning to our bikes at Denbies, Denise found a flat front tyre! So with Bob the Fireman to the rescue, we left them whilst he changed the inner tube. However, what appeared to be a quick and easy fix, turned out not to be so. As Denise relates:

“After my slow puncture and a disastrous return ride we got home at 3.50!
We couldn’t find a leak so blew tyre up (and broke the pump!) We set off and within a mile, flat again. Limped to the bike shop to buy another pump. This time got half way up Box Hill before it went flat again. Changed the tube from the brand new one back to the repaired old one (repaired after last Sunday’s shenanigans). This held and got me home. It must be a faulty valve on the new tube.
A few lessons learned for me, main one being don’t leave home without lights in the winter, it was quite scary riding in very low light at that time of day!”

So after all that Denise and you all, Have a Happy Christmas and a puncture free 2020!