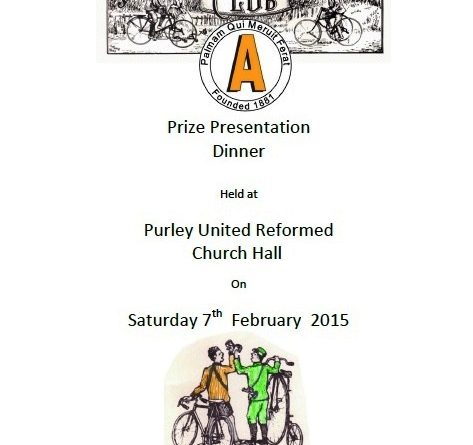 Last year Bryn started a new theme for the dinner menu card, adding into it a bit of club history and art work from times past.  Tom Vaz has carried this on again this year, his chosen theme being cycle touring, an activity which in recent years has become more popular with our club members. More of us are now venturing into  European countries and some have travelled much further afield.  Noteably John and Meike who have been cycle touring as far east as Japan, and of course Yoshi who in reverse, started in Japan and headed west! However the travels of G.H Smith,  have yet to be surpassed by a modern day member of Anerley B.C.
Known as G.H, he was one of the earliest members of Anerley B.C.  Joining the club in the early 1880s he remained a life long and very active member.  We are fortunate that as well as being an avid cyclist, he was also an avid writer.  For the 50th anniversary of the club he wrote up his memories which have become part of the Club’s recorded history. It is part of his memories, relating to his world travels, that Tom has copied into this year’s menu card. G.H became a salesman for Dunlop tyres and in 1896 set off on a world sales tour lasting several years, and visiting in particular the far flung lands of the British Empire upon which the sun never set.  Some of the place names have changed as these former colonies gained independence, but he lists for example: Cape Colony, Transvaal, Natal, Southern India, Ceylon, the Straits Settlements, Hong Kong, and Australia, and as he comments that in some of these places he was the first cyclist ever seen. Whilst on his travels the Boer War broke out. His sales visits to the Cape Colony and Transvaal  must have paid dividends because both the Boers and the British army used bicycles extensively for scouting and other purposes. The British soldier cyclists put strips of leather between tyre and tube to reduce the risk of punctures on the rough terrain. Now we can buy Kevlar belts to avoid punctures, but obviously not a new idea!

Tom completed his cycle touring theme with a bit of humour. So if you have not already started to think about this years summer cycle tour, I hope Tom’s themes get you planning for the long hot days!
Des.