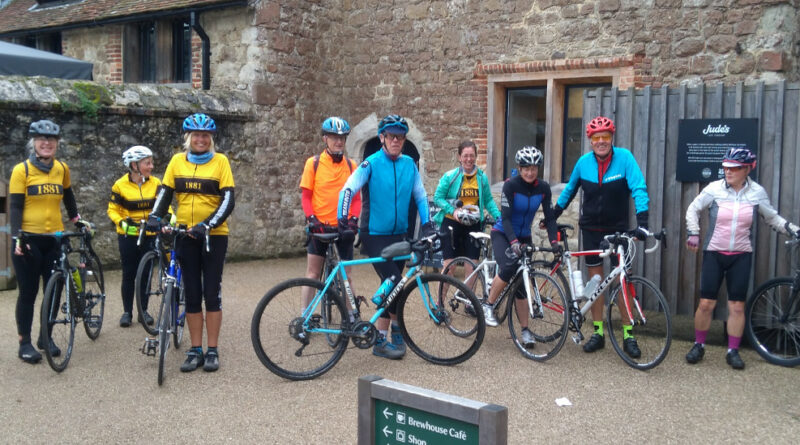 Tom V & John D were unable tolead so the indomitable Tim S & Bob G stepped in to lead the earlies and the relaxed. At ten o’clock there was twenty odd riders ready for Knole Park. Given the forecast for afternoon rain despite the morning blue skies – Bob and I both decided to take direct routes there and back.

The steady group, on balance, preferred the horrors of the Limpsfield Road to the horror of the Beddlestead climb. To compensate we avoided both Tatsfield and the Clarkes Lane escent to enjouy Chestnut Avenue. A bonus was that someone had filled in the worst holes along the untarmacced bit.

We were doing nicely along the lanes to Knockholt when we were stopped by an irate lady driver. I was unaware of the cause at the time.. The confusion grew as her tirade was that someone had nearly run into her rear after should overtook and braked suddenly in front. This was confirmed later by our two lady cyclists she endangered.

Well yes, reasoning and clarification was clearly not going to help. Indeed it was winding her up even more. So please, when the leader asks riders to be quiet – please respect that. We need to get out a road blocked situation asap and increasing her anger about cyclists isn’t going to help the next bunch she encounters.

Joy returned with one of my favourite descents – Starr Hill and then up through Sevenoaks town centre to the deer park for tea.

Mr Google helped with the return suggesting a couple of private roads to avoid going back through Sevenoaks and going too far along the A25 to get to (the other) Chipstead. Back along Pilgrims Way and up to Botley finished the ride and got me home with a few minutes to spare before the downpour.