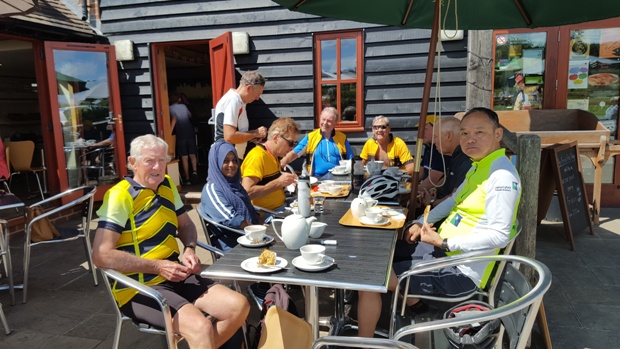 Des writes about the 10 ‘oclock lot:

The weather forecasts for the first week in August were a bit iffy. I was a bit disappointed because I had a long ride planned to New House Farm, south of Faygate. I had never been to this farm, but it was recommended to me in glowing terms. This was a long ride, circa 55 miles, for a Tuesday Anerley pedal, so I was praying for a really good summer’s day.
The forecasts were proving accurate.  On Monday the 1st we had some rain, and on the Wednesday it poured! But fortunately, Tuesday the 2nd turned out to be perfect for my planned ride through some lovely wooded country lanes, in what in the past used to be the great forests of the Sussex Weald.
Mention of the past reminds me that the name, Tuesday, derives from the “day of Tui.”  Tui being the Norse god of the sky.  And my prayers to Tui did not let us down. The sky on our Tuesday, being a beautiful blue with a golden sun. A perfect day for cycling!

I was leading the 10.00 a.m mini peloton of ten riders. The 9.30 sprint team were by then probably already half way to Faygate.  But we more sophisticated riders, were going to make the most of this warm and sunny day. Our more leisurely pace allowing us to fully enjoy and appreciate what our English countryside has to offer.

Arriving at the Coulsdon Post Office there was no need to stop as there was nobody there. All obviously preferring to have their elevenses at eleven, rather than our later lunch stop at midday.

With so many club rides now each week, it does get more difficult to try and devise routes that are a little bit different from those of a few days or weeks earlier. With this in mind, I set out with the hope that I would be able to take my group down a few little lanes and byways which most would not have previously ventured down. 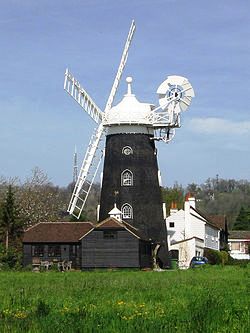 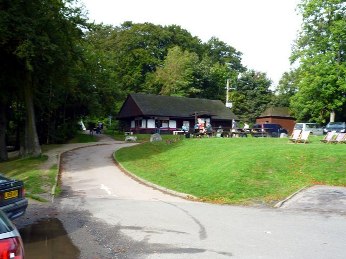 Wray Lane, due to its steepness, was one climb that the Anerley B.C of my early days in the club, tended to avoid. But it was an exhilarating ride going down!
In more recent times and due to much increased car traffic, the local council have made the top half, one way only – going up. Going down on a bike is possible because there is an off road path leading down to the two way bit. However on this occasion I could not find the entry to this off  road section. Rather than deny them the exhilaration of the whiz down the hill, I decided to ride slowly down the one way bit (there is plenty of room for bikes to do this in a sensible manner without any danger), and then enjoy the whizzing bit. I enjoyed it greatly, even if the others did not!

Then there was another bit from years past which is unexplored by most or perhaps all of today’s club members. The entry to this little lane is hidden away behind the end of Gatwick Airport’s runway (shame about the thunderous noise every time a winged monster takes off or lands!).
Time had dimmed my memory and I nearly took my riders up an entry way to a small industrial complex on a farm, but quickly realised that we needed to go another half mile south to find my little used byway, which then led to another long and wooded byway, and another!
I am sure that by now everyone thought that I was completely lost, until coming to a road junction in the middle of nowhere, some one espied a sign post, and with relief in the voice read out” Lambs Green and Faygate!” And a few miles later we were at New House Farm. And it did indeed live up to the praise of its recommenders.

Above, the 12 o’clock feeding time

Below, cutting the hay, yes it is a real farm! 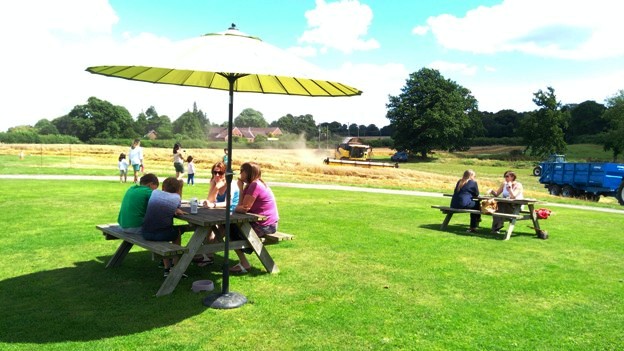 We might have been the tortoises, but the hares did just stay long enough to say their “Hi” s before their time trial home. But we must thank them for staying until we arrived, in order to save us the big table in the photo above.

Of course it was not all plain sailing. Sometimes even the best compass points in the wrong direction. So to save my blushes I have deliberately omitted the bit about taking them up a dead end, into St Leonard’s forest, about half a mile from the tea stop.
Fortunately Tom Vaz, who was the only member of my group who had previously been to the farm, and aided by his sat nav, did point me in the right direction.
And so we eventually did arrive at this hidden away gem of a tea stop.

I did however manage to find my way home without any unintended detours. And even if I do have to say it myself, I thoroughly enjoyed the day out, thanks to Tui the god of the heavenly sky.

And Pete R writes about the half niners:

Those present were Dave and Moira, Barry, Miles, Paul, Ian, Jim, Delmar, Ronan and Me.

We had great weather all day, ten of us set off from Purley. We decided to avoid the A23 on the outbound leg, and instead went over Farthing Down and skirted round Merstham and Redhill. We then went to Charlwood via Lonesome Lane. After Charlwood we went to Lambs Green where we turned South at Faygate Lane and had to resort to Google Maps to find New House Farm, which was great and very welcoming to us. The return journey was via Rusper, Newdigate, Leigh, Betchworth and Reigate then the A23. Great to see John and Meike again, and also to see Len and Tom out on the 1000 ride. Miles decided to return by train, he had probably had enough of my “location exercises” which I tested the group with on the way down. These exercises take the form of me pretending to be lost and seeing who can point us in the right direction. Well done Barry and Dave! About 87km overall. 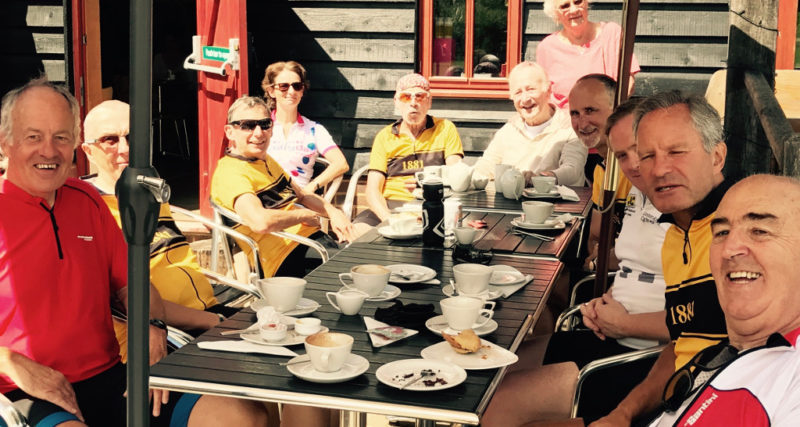