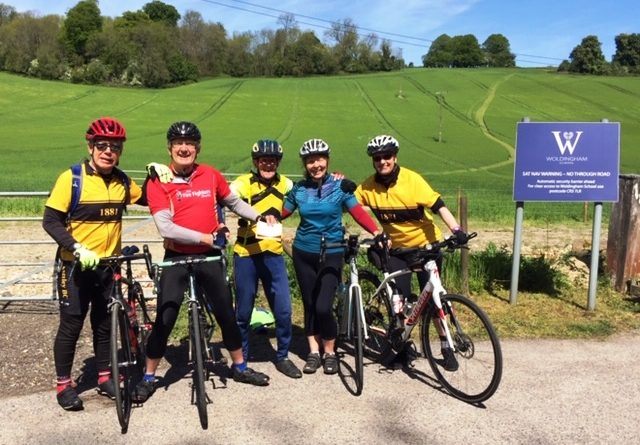 This week’s Ride report is by Frank Kippen, who sent me the detailed write up, below. So thanks Frank, greatly appreciated!

Not having been on an Anerley ride since March, partly due to a Goa bug, your interesting leisurely ride was fine with incidents both ways. Tom tom was the back marker.

We picked up Denise with her healing fractured pelvis and Bob the fireman at Sanderstead. . I touched a raw nerve when I asked how number one son is progressing. Denise took him into Kings hospital last Friday having fractured his clavicle again! Time trialing would be safer.

Denise lead the ride to Warlingham Green, then a detour down the precipitous Bug Hill that I led, to Marden Park to give her and Bob a work out. I was sailing ahead through the glorious park when I realised nobody was following!  Did a U and found the ride way back. It had stopped due to the new Jo’s chain problem.
After fixing,  at the top of the park we had a Swimathon participants group photo. 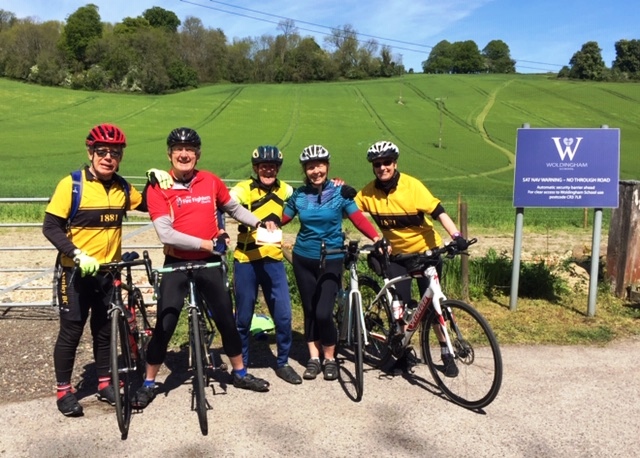 (Bob the Fireman (in the red top) is showing off the cheque for the sponsorship monies raised by the Anerley Swimathon team, part of which went to Fire Brigade Welfare Fund.
Left to right the swimming team were Frank K, Bob and Denise, and Jenny. Some how I got into the picture (centre), undeservedly, because I was not part of the team!  Des)

Des then took us through the Surrey byways to Outwood Mill and a short talk on the mill history and why it was named Outwood. Later we went down a lovely long stretch of track that was sign posted as a cul de sac. We met a lady on horseback, with another horse and choc lab just like Denzel. It lead to a bridleway that came out on the main road not far from Haskins at Snow Hill.

We met up with the steady ride crowd in Haskins and Des handed out individual Swimathon certificates, otherwise the rest at John’s funeral on Thursday.  We sat with the 3 J’s, with Jenny, Jo1 and new Jo2. Tom tom said he was to be a pallbearer and needed to be there an hour early. We are to wear our Anerley tops at the funeral. Not sure if we should wear our full cycling kit as no doubt some will cycle to the East Chapel. Bright colours NO black for the celebration of John’s life. Frank will be there Meike.

The return was via the A22 fork up Tilburstow Hill Road to Godstone village. The two Jo’s were leading up the hill when new Jo ground to a halt for the 2nd incident. Turned the bike upside down to help Des sort out the chain that was jammed between the wheel and block. Jo said that she will be taking the bike in for adjustment when she gets back. (Quickly fixed at Purley’s Bike Republic)

I wondered if Des would take the scenic footpath via ponds from Godstone Green to Old Godstone Church [St Nicholas] and thence to Flower Lane. Spoke to Des along A25 and he was not aware of that path. Maybe try it in the future?
(Misunderstanding Frank. I know the footpath well, but we had passed the entrance to it, adjacent to the White Hart pub, some way before you mentioned the footpath. Hence I thought you were talking about another one across the fields by Flowers Farm, which of course does not exist!  Des)

I went ahead up Flower Lane to the Marden Park turn off track, where I met a female and male hiker who had just climbed through the hedge. They looked weary and said their destination was Tatsfield. I suggested straight up Flower Lane and turn right on The Ridge, or pick up the North Downs FP as he had a map on his mobile. The rest of the ride arrived, offering more advice so I pushed on down through the park and up Bug Hill! Although my legs were aching I revved myself up for the final assault. Surprise, surprise I met a lorry which kindly stopped to let me pass, just at bottom of the hill.

I soon realised that I was not in bottom gear but the next one up! No chance I could change gear, so I raged out loud till I reached a flat section near a house, short of the top, to change down…. Still, come 3pm, I got to Warlingham Green, bought the Times and had a coffee at Flavours café pit stop. Legs recovered so I horsed [very surprising Scottish word!] on to Chez Kippin, Selsdon.

Tim led us on almost the reverse route. We went out via Farthing Down where the ‘Coulsdon Crew’ were to meet us. But they had a damsel in distress with a gear issue. There was much manly stroking of chins with wise words but the shear intimidation was sufficient to make the technical issue disappear without a fight or any real intervention. 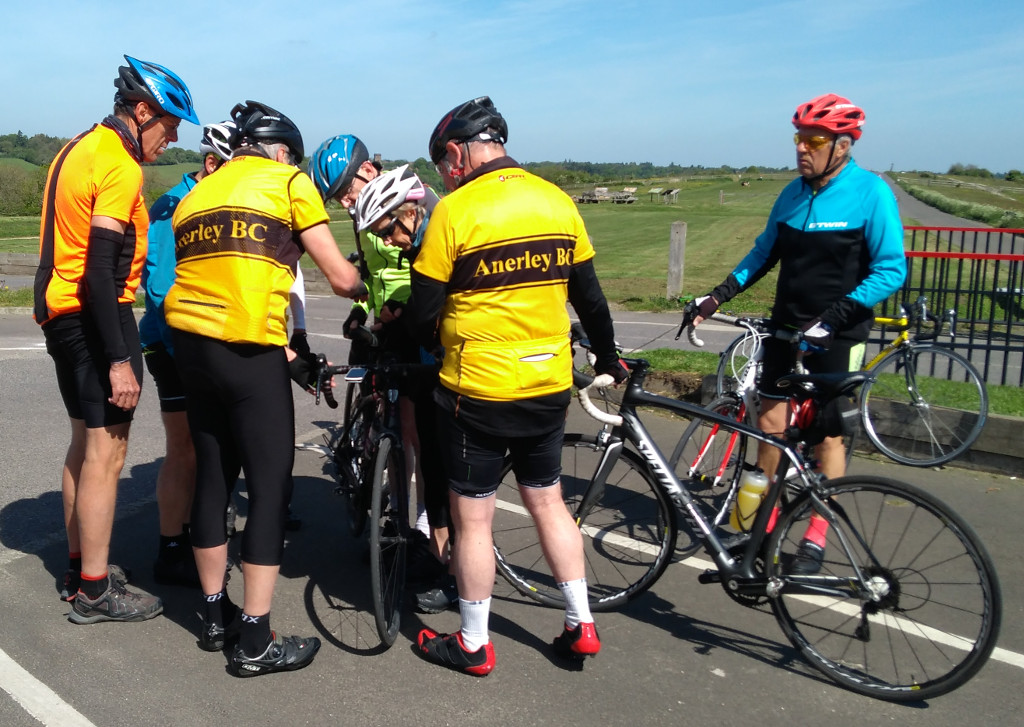 Then an uneventful ride to Snow Hill except to find it wasn’t there. It had been demolished and was now a building site.

Consternation but then Tim saw a sign pointing round the island and we found there new temporary buildings while the old is rebuilt. Thereet the Early team leaving. And as we were leaving the Relaxed Ride arrived. 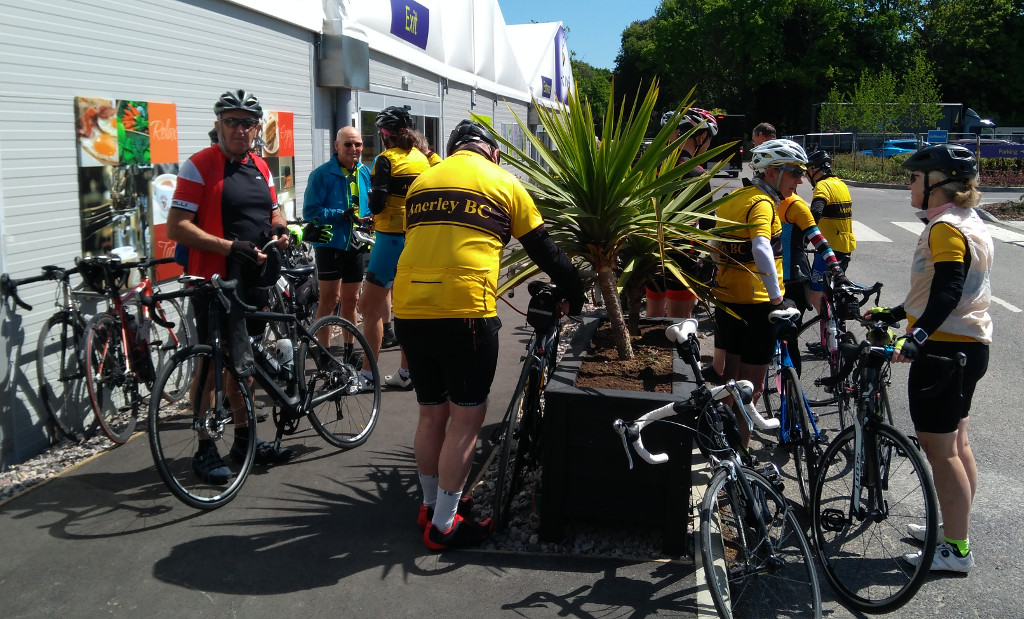