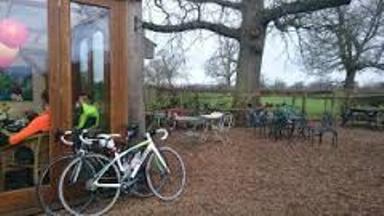 This Tuesday Peter Roberts took our club on a country tour, ending at Tan House Farm. The tea shop here has been a favourite of the Anerley Bicycle Club for several years now. Its popularity with a wide range of customers has resulted in greatly enlarged premises and other added facilities. It might be of interest to you, to know a bit more about Tan House Farm, so read on!

An old name for Tanhouse Farm was Gardener’s Horsie. The Gardeners being the family who lived there for several generations in the sixteenth and seventeenth centuries. The Gardeners, as the name implies, were gardeners, i.e. farmers. To provide additional income the family became tanners. Thomas Gardiner who died circa 1561/62, was probably the first tanner. Like other crafts which required a specialised working area, once a tannery was set up, it tended to remain in use for a very long period. The family tannery is known to have continued for several generations, and probably for centuries. Tanhouse Farm, the tearoom is in one of its barns.

The farm is some distance out from the village of Newdigate, and with good reason!
Tanning was a smelly business, so it needed to be well away from the village. It also required a lot of water, which was provided by the nearby Beam Brook.

One reason for the pong from the earlier process of tanning, was an important ingredient, which has given rise to a well known phrase or saying.  I learnt  this from our fellow club member, Len Owen.  So over to Len:

An ingredient used to tan animal skins was urine. And a lot was needed! So to meet the demand, and to earn a few pennies, families used to all pee in a pot and then once a day it was taken and sold to the tannery…….if you had to do this to survive you were “Piss Poor”
But for those that were really poor folk and who couldn’t even afford to buy a pot……they “didn’t have a pot to piss in” and were the lowest of the low.

And it was not just the tanning process that gave off a pong.  With no running water, personal hygiene was not at the top of the agenda, especially with cold water in winter time! So some more info from Len about the 1500s:

Most people got married in June because they took their yearly bath in May, and they still smelled pretty good by June.. However, since they were starting to smell . …… . Brides carried a bouquet of flowers to hide the body odor. Hence the custom today of carrying a bouquet when getting married.

For the wealthy few, baths consisted of a big tub filled with hot water. The man of the house had the privilege of the nice clean water, then all the other grown up sons and men, then the women and finally the children. Last of all the babies. By then the water was so dirty you could actually lose someone in it.. Hence the saying, “Don’t throw the baby out with the bath water!”