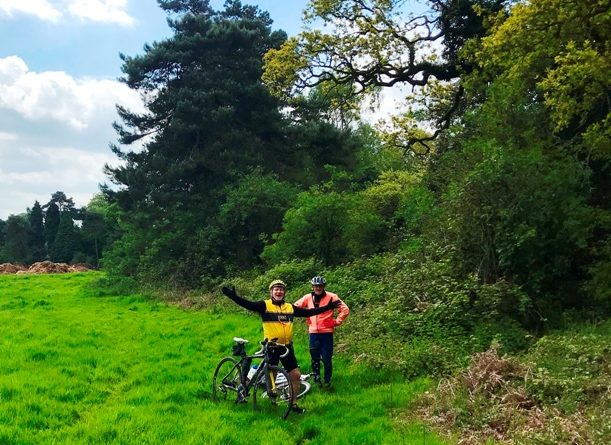 As Peter Roberts has already reported in last week’s Bugle, the 10.00 a.m ride to Stoke D’Abernon, was a second try out of our new regime of splitting the starters into two separate groups, mainly on road safety grounds. Unusually, instead of the expected 15 to 20 riders we totaled only a dozen, of which my group for a more relaxed pace was to be only five. These being Jo Smith, Asif, a relative new comer, Tom Tom and myself. Those of you, counting on your fingers, will have noticed that this only makes four. 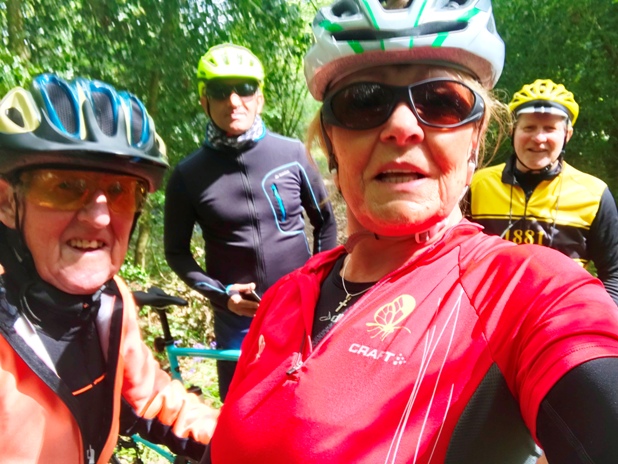 Our fifth group member was to be Denise, who, returning from injury with a fractured pelvis, was hoping to get some easy miles in prior to the Anerley ladies group visit, to see and ride with Maggie at her new home in Bristol.
The plan on this day’s Tuesday Ride, was for Denise to go by car with bike, to Ryka’s Cafe at the bottom of Boxhill, and ride with us to Stoke D’Abernon and back to Ryka’s.

So off we four went, following our normal route out via Chipstead Valley to Walton on the Hill. Here we encountered an abnormal amount of traffic. Enough to actually cause traffic jams thru the village on our route to rejoin the main Dorking Road near Pfizers, enroute to the top of Box Hill.   Passing by Ebbisham Lane I saw a sign showing the road was closed at Hurst Lane, and assumed that the resultant long detour for traffic, was the cause of the problems in Walton.

However when we arrived at the  Dorking Rd, we came across another, and major road closure controlled by the police. We attempted to walk along the footpath beside the road but very quickly got stopped by a boy in blue. Even Jo, fluttering her eye lashes, would not persuade the young copper to let us continue on past whatever was causing the stoppage.

To save a long detour I proposed a cross country route via the network of bridleways, from where we were, to come out at Headley Common.  All started well, but at each fork in the trail we had a 50% chance of choosing the wrong one. Hence the “where do we go now” look of us, lost in the woods in the photo above. But at least the bluebells (below) were worth the visit! 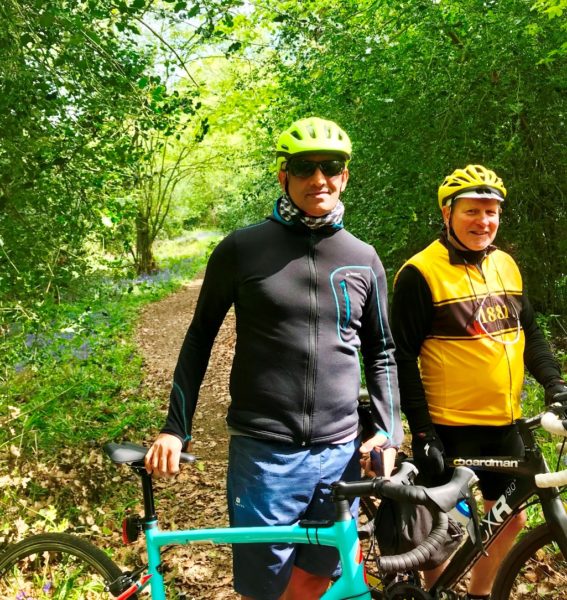 Well we were not completely lost, and soon we were heading in the right direction.  But then we came across a bit of open ground with a well defined track. Except that the track soon disappeared!

With part luck, part judgement, we did eventually come out onto the main, Headley Common Rd adjacent to the top of Tot Hill. From there it was a fast down hill to Little Switzerland. Then a left turn to go past the bottom of Box Hill’s Zigzag,  and so arrive at Ryka’s Cafe. However, using the Anerley Ride, Whats App, we learnt that Denise was still stuck in the traffic snarl up at Walton, so intended to return home. We also decided to abort the onward leg to Stoke D’Abernon and instead have our tea stop in Ryka’s. Except that it was closed!
It was only a short distance to Denbies, but where a cuppa is twice the price charged by Ryka’s. But of course, much posher!

To compensate for the hassle of our outward journey we left Denbies and took a scenic ride home via Pixham, Brockham, over the River Mole into Betchworth, Reigate Heath and Wray Common, to join the A23 at Gatton and back to Purley.

It was a shorter ride than intended, but a bit more adventurous than a normal Tuesday Ride. I don’t  know about the others, but I quite enjoyed it!