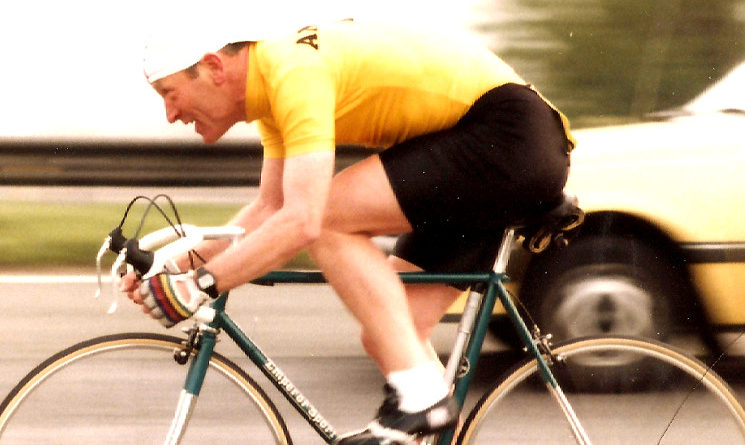 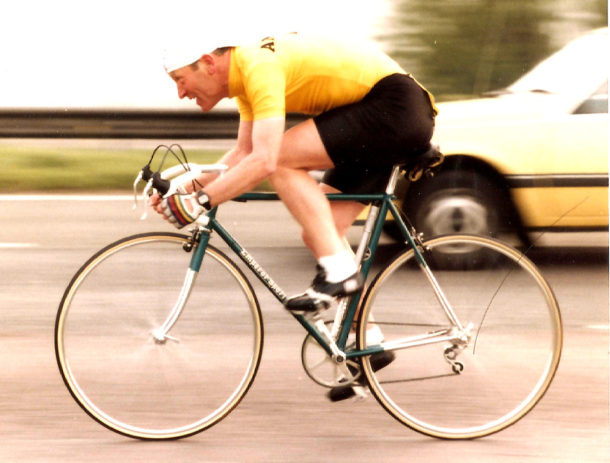 There’s a woman close behind me … and she’s treading on my tail!

What is a vet? Not in animal terms but in cyclists’ terms? It is in fact a shortened form of veteran and is applied to any racing cyclist over 40 years old. Certain races are styled vets’ events and are open only to people of 40 years or older. I was one once.

Vets ride against people from other clubs in a Spirit of friendly rivalry. On receiving their start sheet for an event they scan the names and note their ‘friendly’ rivals. The results board at the ﬁnish of a race enables them to gauge their performance against their peers’.

I had entered a vets’ 25 mile event on a Kent course based on the A21 and starting near Tonbridge. By the way, this was 1983.

Finding my name on the start sheet I casually looked around for rivals near me. There, three minutes behind me, was Beryl Burton, the fastest woman in the country, a world champion, and so fast that only a small handful of men could beat her.

I panicked! Oh, the shame of a woman catching me and dropping me! Me, with my super—light, chrome—ended frame of Ishiwata 017 steel tubing, the lightest in the world. She could ride on a butcher’s bike and she’d still beat me. I knew it!

What to do? As I saw it I had three options. One: don’t ride at all. Plead a cold. No! All my mates would never let me live it down. Two: A puncture. A possibility. Others had done it. The coward’s way out. Standing at the roadside. Back wheel in hand ….. No! I was an Anerley man and couldn’t stoop to such disgusting behaviour. Three: ride as though the hounds of hell were snapping at my heels and go down all guns blazing as an Anerley man should.

Came the day and there I was, awaiting the starter’s call. The wind was blowing hard enough to make ﬂags appear starched.

“It‘s a bit breezy,” a feminine voice uttered behind me. I turned around and there she was —~ Beryl Burton! She had a disarming smile and a Yorkshire brogue.

I was entranced by her legs. Smooth, tanned, lightly muscled. The legs that had beaten the world’s best

“I would call it blowing a gale,” I rejoined, attempting an attitude of lightheartedness, “but I’m only a soft southerner.”

Where were the riders between Beryl and me? Not one to be seen! I’d be her ﬁrst catch. “Five, four, three, two, one, go,” intoned the timekeeper and off I went. “Have a good ride!” Beryl called.

The strong wind was behind me and I adopted my low racing stance: head just above the handlebar stem, elbows tucked well in. I felt good. Helped by the strong tail wind I had rocketed to the turn roundabout. Beryl hadn’t caught me yet. I’d used 54X12 all the way out but once I turned I hit what seemed a brick wall.

“This is where she’ll catch me,” I thought as I dropped three gears to help keep the revs up.

There she was, on the opposite carriageway, heading inexorably to the turn roundabout. Shivers ran up and down my spine as I saw her powerful figure hannnering a huge gear as she chased me.

I redoubled my efforts into the wind and settled down into a grim, horrified grind, one ear cocked for the whirr of Beryl’s tyres as she swept imperiously by me.

Mile followed torturous mile and still no Beryl! Perhaps she’d punctured. My spirits rose a little. Only two or three miles to go. I ﬂogged myself. I thrashed myself. Suddenly I saw the chequered ﬂag. Out of the saddle, thighs burning, nose running, I gave it my all.

“Please don’t catch me now,” I whimpered. She didn’t. She hadn’t! I felt as though I had won the race, so intense was my elation. I purposefully dawdled along, waiting for her to reach me. About 10 seconds later she did. “Eeh! That were reet hard, that were.” Her eyes twinkled with merriment. She knew what I had feared …..

That was, I think, the only ride that season when Beryl failed to beat the hour for 25 miles.