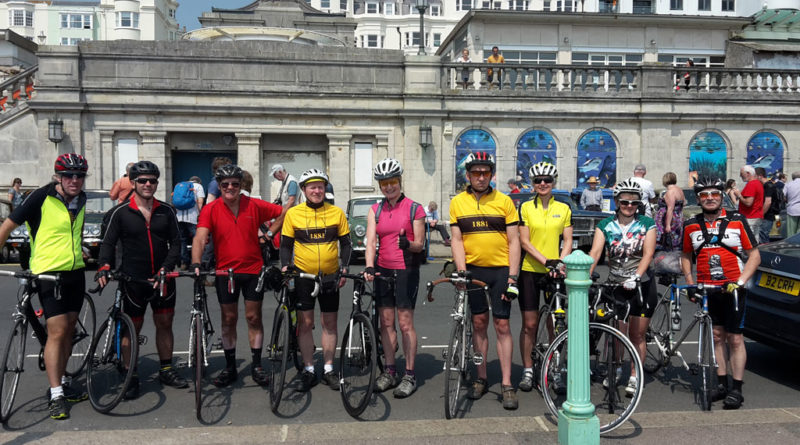 The weather forecast intervened and caused a change from our published runs list. Brighton was chosen as a suitable destination for a warm summer’s day, there and back on a route of 100 miles.

Once again fate struck and the 12 riders who left Purley became 10 as Ewa and Len disappeared off the back of the peleton. our tea stop at Tulley’s Farm is a well used one so I did hope in vain that they would turn up.

On the other hand, Jeremy turned up in time for a cup of coffee so we waited a little longer than usual before heading onwards to Turners Hill. Suddenly Ewa and Len appeared in front of us but too late for a coffee break as they circled East Gristead a couple of times trying to find us ; we were only around 5 miles away! At Ardingly I watched in amazement as Maggie looked at us as we turned right towards Cuckfield and then went the other way towards Haywards Heath. Obviously the prospect of following Frank was too hard to resist. Then again he does put on a good show when working out his routes!

The rest of us made our way through Cuckfield, Hurstpierpoint and Devil’s Dyke. At the end of the Devil’s Dyke Road we encountered a massive queue heading in or out of Brighton. In the chaos of weaving through I managed to lose the entire club but they were told by me to go to the “Pavilion on the seafront”. How the hell we together arrived at the correct point of Brighton Pier is beyond me. With Maggie pinching the good spot for a celebratory photo we took the main photo pointing away from the sea. A large chunk of the group headed home on the train but the remainder headed backup through Ditchling Beacon, Haywards Heath onto our much appreciated pub stop at Turners Hill. The final leg seemed much easier thanks to a large orange juice and soda water. Sadly, I only made 95 miles due to the shortened return route but a good attempt by us all. Especially Ewa for doing the trip + a tour of East Grinstead!