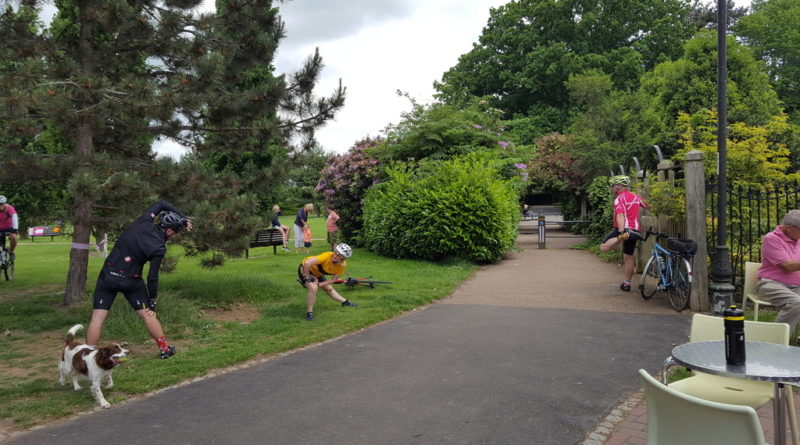 Looks a pretty long ride at 103km I thought while planning my Strava route. However, it was overestimating by a few miles and the final tally was just around 90km. Pretty decent for an Anerley jaunt in Surrey. To me it was a pretty straight there and back with a couple of hills but Frank always has a different perspective…

“Great ride with a few twists. Weather sunny with a slight chill with my minimalist kit except in sunshine, said Maggie.

Met visitor Jeff [IT] for practice for his 500 mile bike ride over 4 days in Thailand in support of a friend who has MS. Also friend Mike[IT]. Also there was Dave from his round London ride with one night camping on Windsor Race course, Jim, Julia, Maggie and irrepressible Ajay [he probably saw Pete in Anerley kit on Saturday when out cycling]. Tried Ajay’s cycling gloves with gel pads he got for me at discount but too small, so agreed to get his money back. I have large ‘mits’ from my father who was blacksmith.

We went the usual way to Reigate Hill up through Chipstead. Fortunately I was at the front down the hill that was a good buzz down to the right turn after the level crossing.

Going along the side of Reigate Heath we were overtaken by a young woman at speed. Egged on by a few of us Ajay stormed off on his state of the art Giant bike and caught up behind her with a two arm raised victory sign…. 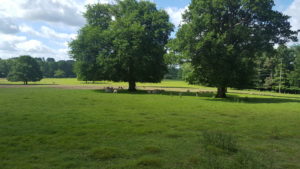 We stopped at the Wonham mansion with deer park to admire the dozens of Fallow deer. Later in Betchworth we met the East Surrey Championship numerous jay and I had a few words to say to him.and marshals at various points along our route to Leigh. Found out there were 300/400 runners……… Gave words of encouragement to selected runner numbers some of who looked a bit shattered. Mike suggested I should be a marshal..

We went the scenic back route around Newdigate. Not far from the moated manor I visited the other week when I went to Tanhouse when It should have been Tulley’s Farm…

On the way to Rusper we had an idiot driver trying to overtake us as car was coming the other way and was trapped between cyclists. Ajay and I had a number of choice words to say to him [could not have been a lady]. The road was dog rough. Mike was missing at quaint  Rusper right hand fork where we stopped. Joined us sometime later to say he had stopped to have a rest. Later sensibly Mike came with us to the Conservatory Café in Horsham park and decided to get the train back from station we passed earlier. 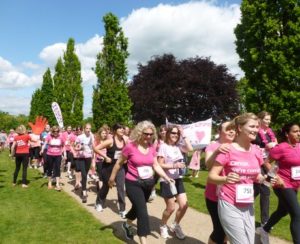 There was a ‘race for life’ walking/running cancer charity event  in colourful pink gear passing the café. It reflected my pink cycling top Breast Cancer Breakthrough from my cycle ride to Cambridge before my step daughter Karen died from breast cancer 3 years ago.

Ajay went into his stretching regime and we discussed benefits of yoga.  Julia did her stretches then the splits [not captured on camera] with a finale hand stand without support. I did so poor yoga stand on one leg with other foot on knee and entwining arms…. and then on other leg.  Ajay suggested perhaps we could do a stretching regime/yoga session in future rides…

Café food very good.  We touched on the appalling terrorists atrocity on London Bridge  last night. Ajay’s regular Friday night watering hole is the Wheatsheaf Borough market but missed last Friday. It was caught up in the atrocity!  As I worked not far way in Southwark Bridge Road and walked over London Bridge recently to visit the City ‘Walkie Talkie’ roof garden.

Tom said that next Sunday is a  100 miler going west of Tonbridge…!!! Suggested to Jeff ideal for his Thailand get fit..

I mentioned a friend of mine Ron Eteson in Shirley wants to get rid on 60/70’s cycle frames and accessories etc. Includes a tatty  ‘Raleigh Lenton Sports ‘Reg Harris Road Model’ frame. Suggested  John Eden/Mark which I will follow up.

Went back via Charlwood [Addiscombe CC fame as some us know]. No pub stop. Don’t follow Ajay/Frank occurred a couple of times…

Onwards back through Reigate past Wray Common where I bought my 1st brand new house way back. I went passed Tom’s Gatton Point impromptu stop to get ahead but caught up by Tom/Ajay/Dave past Shepherds Hill that I guess Julia went up.

Managed to close down on leaders as Ajay did roundabout to Coulsdon and we did the bypass. Right decision Ajay as must be quicker on a Sunday.

I managed to get ahead up the long rise only to see the lights turn red at the business park junction. Followed a huge HGV down to Coulsdon lights and squeeze past later.  Kept ahead as I raced to the Esso garage nr 501 to relieve myself and a Mars bar for a sugar boost and drained my bottle. Up Purley Downs Road to Sanderstead trying to keep up with riders who had Leith Hill earlier. Edged  ahead at Selsdon cross roads where I turned right. Over shot my 2pm curfew by 45 minutes!”

Can’t say I understand everything written above but that may be because of Brexit!