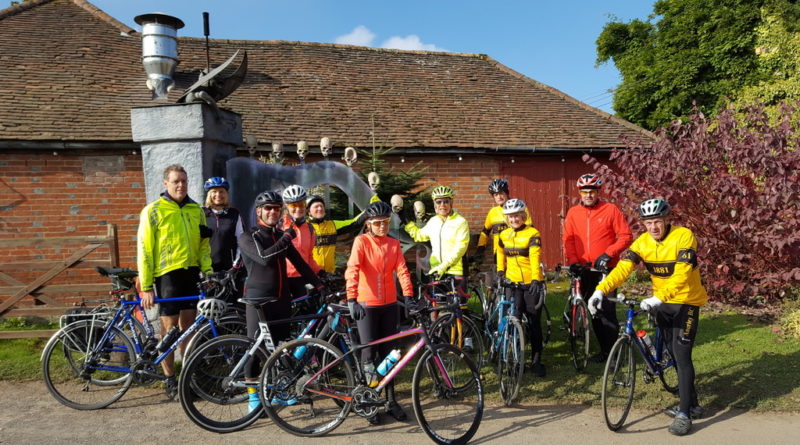 A large group of 15 met at Shurguard on a sunny morning heading for the regular haunt at Tulleys Farm. As we huffed and puffed over Farthing Downs, Ken struggled to breathe and disappeared – a sign of a cursed ride I thought.

After flying down Hilltop we sped on and through Bletchingley where the resident ghost at the Red Lion is an elderly woman in grey, dressed in working clothes from the 18th century. No sign of her and I meandered on to Rabies Heath Road and Tilburstow Hill where the curse struck again as Des peeled off and headed home – struck down mysteriously.

We travelled along to Old Hollow and I only just saved Frank from the eerie curse (in his case no mystery as he tried to lead off in the wrong direction as usual).

Tulleys Farm are doing their Shocktober Fest and decorating was in full swing. The carpark was pretty full but spookily the tea room was pretty empty.  Tea and scone was not at a shocking price but I expect the event next week will be much more frightening at £53 for a ticket “Including everything in the X-Scream ticket. Fast Track will also allow you to jump the queue once per haunt.” With 60,000 visitors heading to this party of the countryside the profit will certainly raise the hairs down the back of my neck!

We escorted Julia to Lingfield where she must really work hard in the Notre Dame school – even putting in time on a Sunday which I hope her pupils appreciate.

We split outside Tandridge and Brian took the pubbers to the Barley Mow while I brought the rest homewards through Marden Park. Of course there was another sting in the tail as the curse took out Steve who got off his bike and limped up the hill towards Flower Lane.

A grand day out for late October prepared with weather as good as we could hope for. I could have stayed in bed and I would have gotten away with it if it weren’t for you meddling kids.