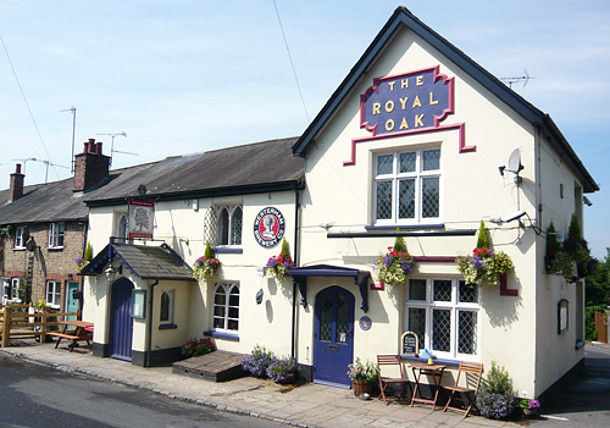 After all the rain on Saturday night and still coming down on Sunday morning I wasn’t sure whether to venture out but I made it to Shurguard arriving just before 9 to see Yoshi unloading his bike. That was it only 2 but we made our way to Kenley station to meet Jeremy and then onwards to Whyteleafe and through Marden Park. Then on past Al Fyad’s place and after picking up the pilgrims way ended up in the Cafe in Westerham in beautiful sunshine.

After a lovely breakfast and waking Yoshi up Jeremy took the reins taking us up Horns Hill then turning left down what must have been the muddiest road in Kent!!We eventually made it to the view point at Toys Hill and after taking in the view and having a drink we were still in lovely sunshine. Dropping down to Four Elms and after turning right arrived at Crockham Hill at 12:30-ish.

The Royal Oak is a traditional English pub and Jeremy and Yoshi took advantage of the beer. After finding a table our broom wagon turned up. Finishing our beers the broom wagon informed us that as it was such a nice day we should cycle back so we did via Hurst Green and Crowhurst. Ending back at Godstone we retraced our morning route back to Kenley. Said our farewells and just got home before the heavens opened, how lucky were we?

Just a quick note to find out if anybody is interested in a local walk once a month (probably second Saturday in the month) To start with we can try local walks and if we get on OK then longer in the Summer. Roughly 8-9 Miles, bring flask for Coffee and sandwich for lunch and probably finish of with a beer in a pub.It’s open to everyone so some of you can bring your partners. Let me know and I will sort something out in new year
Have a great Christmas Graham ( and Corinne ( the broom wagon driver )