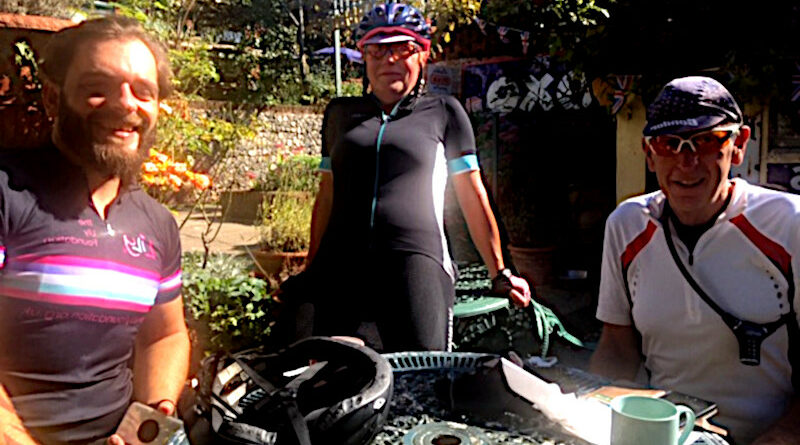 This was a ride of two halves with Karen, Tommy, Stuart and Pete heading out to Shoreham air museum for tea. After which Tommy and Pete returned via Pilgrims way and Clarkes lane whilst Stuart and Karen headed out into Kent to notch up another ton before the long nights settle in.

Outbound we headed up Beddlestead lane in glorious sunshine and then out via Tatsfield and Knockholt to ride down into Shoreham.

The return for Tommy and Pete was via Pilgrims Way which was as usual very picturesque. Clarkes Lane was a bit of a drag so we rewarded ourselves with break at the White Lion in Warlingham sitting out the front in sunshine sipping cold Lager.

Meanwhile, further afield, Stuart and Karen followed what is becoming a regular route to Marden in Kent nand bumping into Denise & Bob for the second time on the day in one of these:

Our rule is to stop at the first pub after 50 miles from home have clocked up. and turn after refreshment to make the ton door to door..

This was the unpretentious but very friendly West End Tavern in Marden.

Outbound we did Wrotham, Plaxtol and Yalding. Back after Hadlow we took the softer southern route with a brief stop at wonderful Greyhound at Chillcot so we could squeeze through the North Downs at Marden Park.