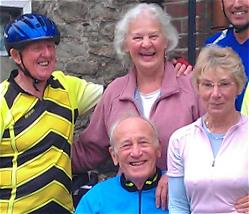 It was my birthday on the 1st October, and in Anerley tradition it was my turn to buy the teas. Not only was this my birthday ride, but this week’s Tuesday club ride was also a first in many respects.

First off my eldest son Paul,  joined the ride. A first for him! Not only did he come and join the Anerley throng, but he brought a couple of friends. One, Martin, is normally an Addiscombe rider, so a ride with Anerley B.C was a first for him. His brother, another Paul, is a very competitive runner. He has just returned from a training camp in Tenerife where he had tried his luck at a triathlon event. As he said, “I can’t swim, but the cycling bit was great”. Great enough that he has now forked out £1,000 on a snazzy carbon fibre job! So to go out on a bike club ride was a first for him.

My chosen destination for the Tuesday ride was the tea room at Otford. This 39 mile round trip bike ride offered some good hills, both up and down, especially the fast descent and sweeping bends of Star Hill Rd!

Unbeknown to the regular Tuesday riders a special assignation had been arranged at the tea stop. The look of surprise was a picture to behold, for there, sitting at the table, were John and Meike, my very honoured birthday guests! And most important of all it was a very special first for John. His first outing with the Anerley Bicycle Club since his illness struck. The first I hope, and expect, of many more.

And to mark the occasion Ricky took this photo so is missing from the line-up!