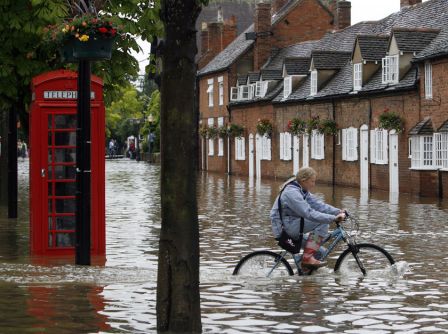 After the endless, record breaking rain storms and gales which have assailed us for the past two months, can we now start to think about Spring sunshine?  Whilst the unprecedented floods that have covered so much of our green and pleasant land, such torrents of rain are annual events in tropical climes.  The words that follow are by an Anerley B.C member, who in his day had pedaled in more countries than any other cyclist. He had endured rain storms, snow storms, sand storms and everything else that fickle weather can throw at us. But as he records, nowhere on earth can compete with the beautiful scenery of our English home counties.

MARCH, WITH A HINT FOR THE SUMMER TACKED ON.

An item written by Club President, G.H.Smith  for the Anerley Gazette of March 1914.

March, the very word appropriately suggests movement and activity, and to the cyclist it is the trumpet-call that wakes the sleeping beauty in the cupboard under the stairs, or in the attic, the trusty and by now somewhat rusty bike, that is hauled out into the light of early Spring, to be polished and oiled and ad­justed preparatory to another season’s enjoyment.

Of course, the above description is only true so far as quite ordinary cyclists are concerned; your true Anerley B.C. man knows no season of wasteful ease, to him Winter merely conveys a sense of participating in his favourite exercise in a concentrated form, a freedom from dust, and a reduction in the host of his motor tormentors. But to all, your butterfly, or your nil-the-year-rounder, March is an important and distinctive month. Committees may issue their fiats as to when a season starts, the last Winter Run and the first of Summer, and it is more than likely the first event will be run under a perspiring sun, and the latter in a snow storm, but whatever practical joke in the buoyancy of its youth the month may play, it still remains March, the hopeful season of bright expectancy, of dry roads, lighter days, of new enamel and patched tyre outer-covers, of sprinting starts and very baked returns, of wobbling novices and resurrected creeks, in short, ‘tis Spring.

March opens the gate to the English cyclist’s season, a long vista of real enjoyment extending through the changing but at­tractive months, right away down till October is out. Few, very few are the other countries of the world where such a length of favourable cycling time is exceeded, or equalled. In one place the deep snow, followed by weeks of unthinkable slush; in another the heat that makes it dangerous to place the ungloved hand on the handlebar near noon; in another the fierce wind so charged with cutting sand that it files the enamel from the frame tubes. All these and other extremes combine to restrict the period of the cycling season in less favoured lands than ours, and indeed it would probably be very near the truth to assert that enjoyable cycling is possible on more days in the year in the South of England than in any other part of the globe.

We perhaps sometimes forget this and we take our almost play­ful climatic vagaries too seriously. The ‘Gazette” may deplore the way the rain interfered with the runs in any given month, but wet as it may have been it certainly did not rain for six weeks on end with a violence that sounded like the roar of a waterfall, as indeed it is; and yet that is the usual annual experience of cyclists in some parts of the world. It may be windy this month, but we shall not have to get off our machines and lie fiat on our faces on the ground, and fail to find our cycle when the breeze is over, because it has been blown too far away; yet this is an ex­perience met with in places where other cyclists are.

Indeed, cycling in this much climatically criticized country has many compensations.

Our scenery.  Do we get all the enjoyment out of it that we might, twixt March and October?   Ignore for the moment the crack spots, the Lakes, Dartmoor, North Wales and Sussex, Kent and Hants. How well most of us know them, at any rate from the point of view of where all hills are least acute, the roads best surfaced, the  inns most generous in their fare and least lordly in their charges.  But are we equally conscious of the mental refreshment and repose of the ever changing, yet ever constant green of fresh vegetation, and centuries of cultivation.  Of the variety of hill and dale, wood, common, hedgerows, meadow and ploughland.  Or has long use blunted the edge of apprecia­tion, and all been taken for granted as the normal experience of every­body everywhere?

The writer believes that the infinite variety of scenery in as small and get at-able as it is in England, is absolutely unique to this country.  In other countries you can see a plain and see a hill, but likely as not a sight of both would entail a day or two’s journey in a train.  Here you can see both many times over in the same county, in miniature it is true, but not the less pleasing for that.  There are many places where to view a wood would mean a journey of hundreds of miles, the next turn in the road will reveal one to us, and a gem of a wood, too.  What would we think if on our Saturday Run, or our fortnight’s cycling tour, was through scenery every mile of which from start to finish was an absolutely exact replica of the previous one?  Yet such country in the world as a whole is more common than rare.

The sober truth is that Anerley B.C. men have for their cycling ground the very cream of the earth, from a cycling point of view.  And from the same point of view enjoy a climate, although they don’t know it, that taking one thing with another, is not equalled anywhere else.  It has been the writer’s privilege on various occasions to conduct foreigners about the rural parts of England and invariably the charm of the scenery has enchanted them.

I recall one occasion, when by appointment, I met a party of American touring cyclists at Newhaven, and rode with them to Lewes, Brighton and London.  Quite a hum-drum route, it sounds to us. Yet for them it was to experience a revelation of wonderful things.  The ride was a slow one, for they were forever dismounting to enjoy at more length some view, some grouping of colour in the landscape, some old ancestral home, the soft restful roll of the verdant South Downs.  Their delight was real and undisguised.

Change of scene—and this is good at times—is obtained cycling in other lands, but nothing really more beautiful than is within an hour’s ride of our own door.

“Some men a thousand miles will roam,
To find some beauty spot,
And leave a fairer scene at home,
Yet know it not.”
G.H.S.