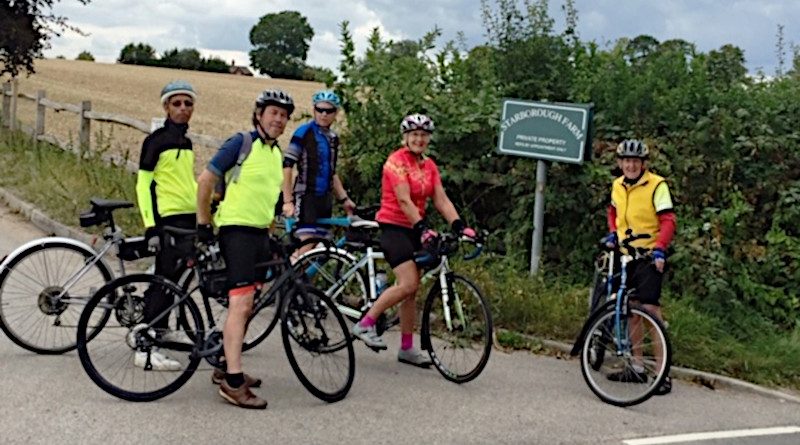 Lingfield has long been a favourite destination of Anerley club rides, but it has so much more to see in it’s network of local country lanes. If you keep your eyes open!
You all know how to cycle to Lingfield, so we then headed off to explore, after our tea stop at the Red Rum cafe.

Out through Dormansland along tree shrouded lanes, past its railway station, straight on and then a right into Hollow Lane. After a few ups and downs we came to a short but steep down followed by a steep up. At the bottom, the road passes over an insignificant little brook, only noticeable by the iron railings. However this little brook is not as insignificant as it appears.
Firstly, it is the border between three counties. On the north bank, Surrey is to the west and Kent to the east. On the south bank is the county of Sussex. It is known as Kent Water because it’s longest part flows through the county of Kent to join the River Medway.

Secondly, this little brook became the source of a major local industry which generated considerable wealth for some of the local landowners and those who operated the businesses. This was the manufacture of canons, cast from the iron ore to be found in the local sandstone outcrops.
Kent Water provided water power to work the bellows of the furnaces, and the hammers to break down the ores and to wrought the iron.
Now it is all history but the memories survive in local place names, road names, house names, and especially on O.S maps.

Now in Sussex, Hollow Lane took us up to the A264 and we soon saw a road sign indicating where once water driven hammers were working away. The surrounding woodlands providing the charcoal to fire the furnaces.

Probably nothing to do with the iron industry, but a magnificent country house was built here in 1792, by a very famous architect named Benjamin Latrobe. His main claim to fame is that he designed the White House and and US Capital Building in Washington D.C. Before of course the American War of Independence when we lost this colony!
In more recent times Hammerwood House and estate were owned by the famous rock band, Led Zeppelin.

Next a left fork down Holtye Hill took us back into the Kent Water valley. Then left again, into Furnace Lane. Shortly the lane crosses over a dam made in Tudor times to create the extensive Lower Furness Pond. Now in the county of Kent we followed the brook upstream to the Upper Furness Pond. Here the road name changes to Smithers Lane, a memory of the smithers who worked the water driven hammers at another dam across Kent Water. We stopped here to look down the slope to this second large pond where Scarletts iron works had once been.

There is a big old house named Scarletts, along the road near here, built from the profits of this iron works. Also the old Smithers and Basing Farm.

In later years Scarletts iron works was acquired by one of the wealthy and important Titchbourne family who lived nearby at Cowden. The Titchbournes supported the Parliamentary cause during the English Civil War and it was a lucrative business selling canons, armour and other weaponry to Cromwell’s militia.
It is of interest to note that a family member, Robert Titchbourne, was one of the 59 men who signed the death warrant of King Charles I.

Smithers Lane took us back to Hollow Lane and Dormansland. But instead of going back towards Lingfield we headed east on the B 2028, Moors Rd, towards Edenbridge. Turning off shortly into Starborough Rd.
Here we stopped by a sign at the entrance to Starborough Farm.

On the opposite side of this minor crossroads was originally Starborough Castle, a moated and fortified castle.

After the Civil War, Oliver Cromwell had it completely dismantled to avoid it becoming a rallying point for the Royalists Rebellion after the Civil War.
In very recent times a local farmer acquired the small, moated island and built a very interesting 2 bedroom house with a great hall. It was advertised for sale in 2017 with an asking price of £1.7 million if you fancy living in the country!

A mile or so up the road you will come to Haxted Mill, which most of you will know as being on one of our oft used return routes to Purley to complete a 50 mile ride.
Des.