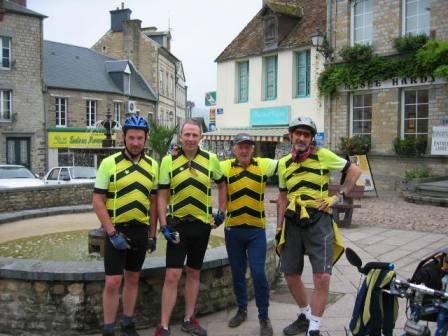 There is something very special about going on a cycle tour, and especially a foreign tour.  Whilst there are plenty of organised tours available to choose from, nothing beats organising your own.  With of course some good friends for company!

You have a number of options.  Logistically, the easiest is to use one or two locations as a base and then travel out to different places from there. A big advantage is that you don’t have to carry all your luggage each day.  Only for first arrival, and final departure. But many prefer a travelling tour, either from A to B, or a circular route, from A and back to A for the final departure.

But where to go?
The world is your oyster, however for many practical reasons (cost, time, etc) Europe has plenty to offer.  Below is a network diagram with this link to many European cycle routes EuroVelo Route 6 is a popular choice.  It starts at the Atlantic coast in France and goes thru 10 countries.  Heading east, the third country is Germany where the River Danube rises. The rest of EuroVelo 6 follows this river until it flows into the Black Sea in Bulgaria.  So lots to see!
The whole route is over 3,000 km long so you will need to choose a bit that excites you.  In addition to coast and river, you will pass historic castles, Roman forts, mountains, and much more.  A cyclist’s dream, especially as following a major river, it is mainly flat!
If you read my last posting you will know that the bit that excited me, was Serbia.  As I am currently researching Serbia, let me use it as an example of a bike tour. Where ever you choose to go, research and planning will be along the same lines. Search and you will find.  The internet will have everything that you need to know.  For example some useful tips from a newcomer to bike touring, cycling from Germany to S.E. Asia.  This part of their journey was thru Serbia in winter!

Whilst reading about other peoples’ cycling adventures will enthuse you, do not forget some of the other things which are very sensible and important to consider. For example: The European Health Insurance Card (EHIC). If you are a UK passport holder, with this card you can get hospital and most medical care, free, even though Serbia is not a member of the E.U.  Check details here Another important consideration is money!

The many countries now in the euro zone have virtually removed currency problems.  The U.K is not in the Euro Zone, and nor is Serbia.  So no euros but the Serbian dinar, currently (Jan 2016) 160 to £.  Useless anywhere else so don’t end up with a pocket full of loose change!  Before you go you can order dinar thru your UK bank, but they will usually not accept any dinar that you have left when you return.  You can change £s to dinar, and dinar back into £s at banks and exchange offices in Serbia. For example at Belgrade Airport if you are flying.
In Serbia the use of credit cards is limited to big cities and then only at some bigger stores, hotels, restaurants.  You can also draw cash at ATMs in the big cities and some bigger towns.  So don’t rely on them too much! And something else that you cannot always rely on is the weather.  Sunny Spain was no exception for these Anerley tourists.  A morning of torrential rain!  So it is always worth Googling the weather statistics.  For Belgrade, a good place to start a bike tour in Serbia, I learnt the following from weather graphs:

Average number of days with some rain/snow per month. Yes, lots of snow in Serbia!

So that is a few things to get you started if you fancy a foreign cycle tour.  If your found this item interesting, have any queries, or want to see more about touring, there is a Comments box below.

15 thoughts on “Do You Want to go Bike Touring?”