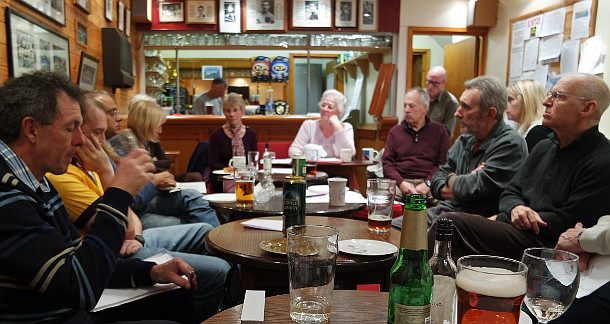 “Open a bar and they will all coming running”

It appears to have worked as seventeen turned up to the Club’s outing to the South London Harriers Clubhouse in deepest Coulsdon. Home to Gordon Pirie and Derek Ibbotson who were pictured above the bar. Both were middle distance world record holders in the 1950s. Here’s Derek knocking a second off the mile record in 3’57”

And here is Gordon knocking off a Russian and FOUR seconds:

Meanwhile back in the 21st century Meike opened the meeting which proved to be less traumatic than the last few with the vexed issue on Club Kit. Brian P was distributing the latest batch and we should all have them in the next few weeks. Jeremy can be seen modelling the top below ….

Brian was given a vote of thanks and we moved quickly on to (re-)selecting new officers. These are:

The captain reported the Sunday Rides were becoming more popular averaging between 8 and 9 riders. The Tuesday rides are now even more popular with up to 10 riders.

The treasurer reported our income once again exceeded expenditure by £71.27 to give us net assets of £2496.08. Doubling up as membership secretary Brian welcomed new members: Peter S, Thom M, Bob G and Henry J. We now have 34 active members.

The Social Secretary would like us to put two dates in our diaries:

The Barnham Picnic was a success. Sandra plans to repeat it in 2015 with possibly a second picnic …

The Webmaster reported the site usage was continuing to increase. You can see the running (sorry) results here: http://anerleybc.org/stats

That’s about it other than record Jeremy H had won the freewheel competition earlier in the day. Is he now looking for free beer?