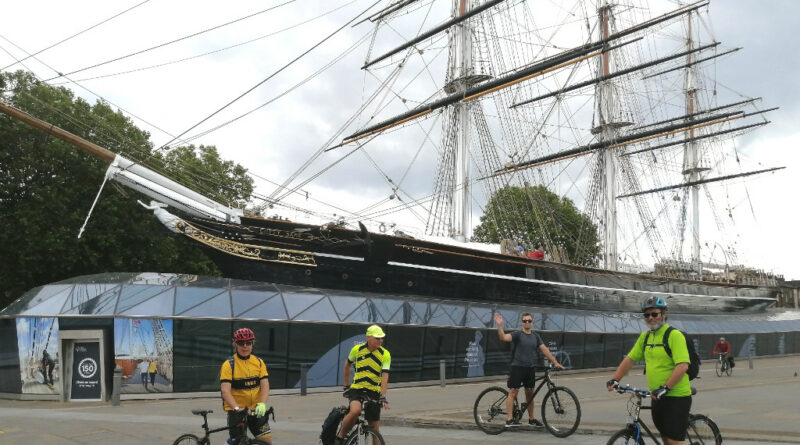 Rides are limited to max six people. Here’s two reports from the six that went out Tuesday:

Starting from the Anerley Aldi as a homage to the club’s original starting point, the Robin Hood, which used to stand on this spot five of us took a historical pilgramage.

First stop was just around the corner in Beeches Close. The notorious home of the far right British First organisation and home of its convicted racist leader Paul Goulding whose fake propaganda was tweeted world-wide by President Trump.

We joined the Waterlink Way – the riverlets that drain south east London into the Thames at Greenwich. A panorama of vistas from the positivel rural, parks, Victorian terraces, modern high-rise ‘professional’ apartments in Lewisham to the seedier parts of Deptford and finally the refined homes of Greenwich itself.

The Cutty Sark stood closed completely bereft of tourists. We push on along, mostly, the Thames Path and across Tower Bridge. Here we stopped for refreshment and the best picture of the deserted Tower we could find:

We followed the new Embankment cycle way to Parliament Square adding to the 3,000+ cyclists who had passed that way earlier in the day according to the meter at the side.

Over Lambeth Bridge and down the Walworth Road, Camberwell and then the rather pleasant Dulwich Village. Here we bowed to our founder’s at Dulwich College and then the only real hill of the day – up College Road to Crystal Palace Parade and down into Sydenham taking a halt to admire the vista that prompted an exiled Camille Pissarro to pait this:

A final homage a few hundred yards away to John Turnbull who spent his final days at St Christopher’s Hospice. Aptly only a stones throw from Anerley. But we didn’t – except taking in Bett’s Park which has, according to John D’s history notes the last remains of the canal that flowed through Sydenham, Forest Hill briefly until it was conveted into the even more shortlived pneumatic railway before that became today’s Brighton mainline into London Bridge. Here’s some memories of the area:

Just the three of us set out from the top of Farthing Downs to Tanhouse. John Di, Barrie, and Peter K. Peter warned that he had not been doing too much cycling recently so may drop off if we set too hard a pace.

The route out was via Shepherds Hill, Wray Common, through Reigate and across Reigate Heath, Clayhill Lane and the whole length of Partridge Lane. At the end of Partridge Lane we turned right and sped down to Tanhouse, the others using my slipstream to beat me there. The weather was warm with a couple of light showers, but not enough to prompt us to wear waterproofs. Good stop at Tanhouse for coffee and sausage roll in my case (with Sue having gone vegan I sometimes take the opportunity for a sneaky bit of meat!). Good conversation which inevitably turned to COVID-19 and lockdown.

Back via Box Hill, Walton, Kingswood Estate, Outwood Lane etc. Unusually we all live up in the same area so I was first to peel off into my drive just after 1pm so that was a bit of an early bath. The ride was just short of 70km and was billed as 50 miles so I guess that’s about 8km short.  Average speed was 25.5kph, and as Barrie said it’s about quality rather than quantity. A good quality ride!