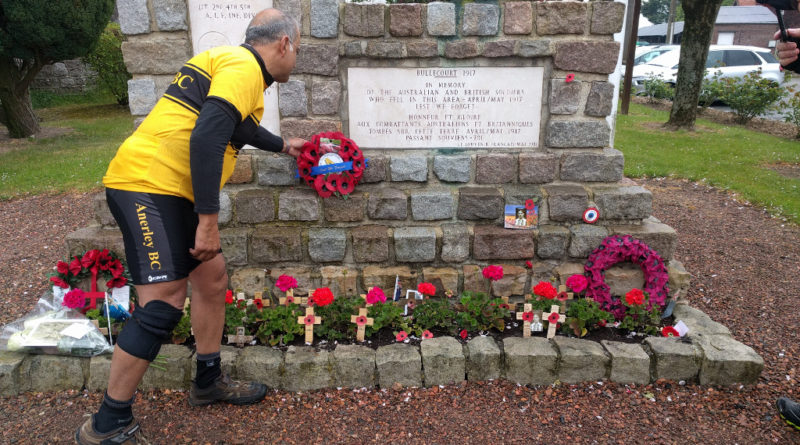 I have added  my historical notes for this trip here:

The hours I spent poring over maps as rewarded by a hilly but not too hilly route through Kent to Canterbury. 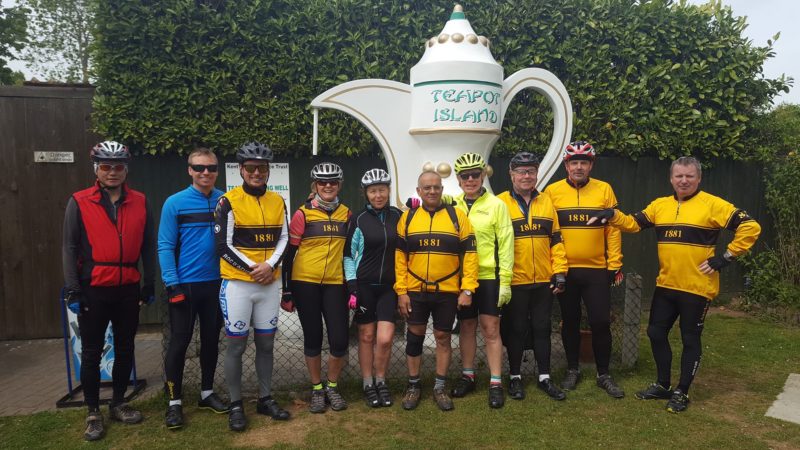 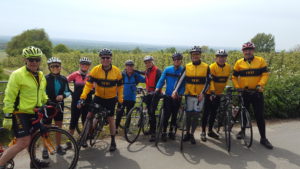 After Hildenborough we followed the quiet country roads, past the apple orchards and yellow fields of rape and enjoyed the great views while we meandered through the quiet villages along mostly flat roads. Eventually you have to cross the Weald of Kent to get to Canterbury from the west. We had one short, sharp hill before we arrived at Sutton Valence. 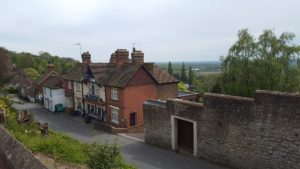 Sutton Valence is very much the Kentish Village pub graveyard, we saw 4 disused pubs in a three hundred yard stretch but the views across the countryside are amazing.

As we followed the ridge of the Kentish Weald in a fairly straight run, Tings looked perfect until we were just 8 miles from Canterbury near Shottenden. Jo unfortunately fractured her shoulder blade in an accident and was eventually taken away by an ambulance.

After the wait for an ambulance and the delay while the crew drugged Jo up, the rest of us wended our weary way to Canterbury YHA for the night. A walk in soft rain to what turned out to be a really nice cafe/restaurant was tempered by reflection of what at happened as well as the sight of the Sunday night clubbers wandering around in their extremely tight, revealing gear. Not attractive on a cold, wet spring night to our weary eyes.

Day 2 – Start your day with an uphill…

Cool to start but we gradually built up steam as we ploughed on up the Pilgrim’s Way but now with luggage.

Denise spent the night with three men and the experience shook her up so much that she sped up every hill to get a room to herself… Joking aside, Denise was strong up every hill and put most of us men to shame.

However, another day on tour with the Anerley and my blood pressure fluctuations were starting to look like this morning’s mountain profile. The route to Dover was a series of hills and we did have luggage now. Some for the very first time I suspect, looking at Frank’s improbably balanced Carradice. By the time we arrived in Dover it was raining and I was trying to weave a route out of my Garmin and mobile phone to Steve’s car where the wreath and some luggage awaited us. 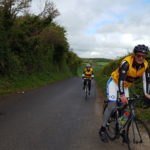 Just when I thought we were finally safely (a bit wet but safe I thought) another Frank moment. We all waived our passports through French control and the controller only gave us a perfunctory glance. 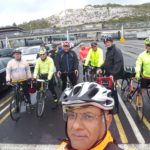 What we didn’t realise was that Frank waived his wife’s passport instead of his own. He’s going to have to wear makeup for the rest of this trip!

We met up with Stuart near Calais for a cup of coffee but from Calais to St Omer was a very hungry experience. Mayday is international workers day – oddly enough a day of nobody working at all! Nothing was open, not even a supermarket or a cafe. Forced to eat our emergency rations. Bad tempers flared as we starved our way across gorgeous countryside. 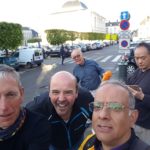 I lost part of the group who stopped to take photos before deciding not to take the cobblestoned route through St Omer. Eventually, we stopped waiting for them and went to the hotel where, after a period of confusion, we discovered we were booked in the other Ibis in town.

After checking in, everybody disappeared in different directions looking for food before reappearing suitably stuffed… Early night for me but the “lads” drank late into the night.

Day 3 – Another great climb to start the day. 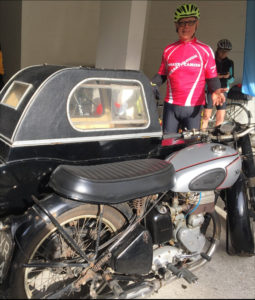 Before we left the St Omer Ibis, it was rather nice to spy a British motorbike with sidecar ala Wallace and Gromit. Here we have Frank doing his best to explain that he needed more Wensleydale…

Despite the general impression of northern France as a flat affair, the route from Arras to St Omer involved hills and more hills.

Firstly, at La Coupole, we stopped to look at the WW2 doodlebug museum, very interesting it was too. Much information about the early part of WW1 as well as information from the WW2 creation of La Coupole. 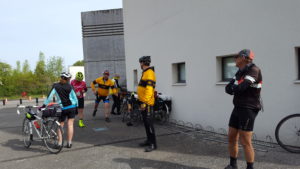 To be more accurate, the rest of us looked at the museum while poor Frank tried to resolve his passport issue on the phone, calling wife, British Consulate and British Embassy who all told him where to go (some more politely than others said go to Paris to get emergency papers). He put off his decision to another day, eagerly wanting to do the tour section to Bullecourt.

We left La Coupole and almost immediately began one of the hardest climbs of the trip. Up and up we went around the hill that La Coupole sits on.

At least we’d had a decent breakfast. A good drink at the top prepared us for the long, straight ups and downs of the D341. A quiet but well surface road – absolutely perfect for time trialing but also providing views over the surrounding farm fields for us tourists. 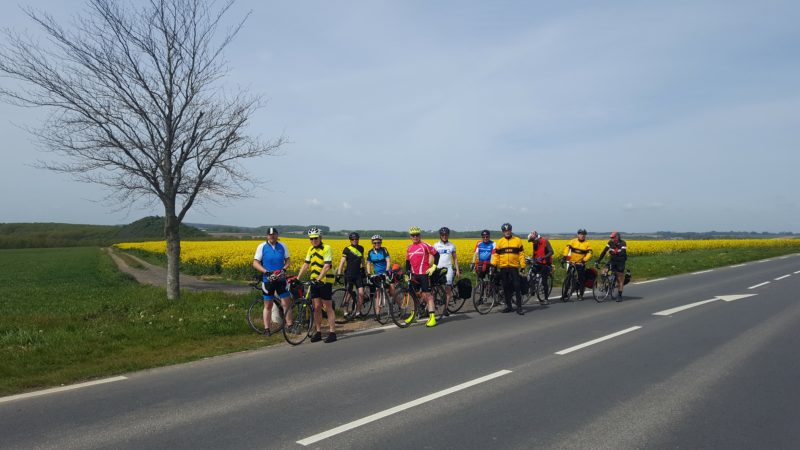 After going in a straight line for 12 miles (seemed forever!!), we reached a bend in the road leading into Auchel where I had planned a lunch break and bang on time we got there to find a delightful restaurant which served us with mountains of chips! 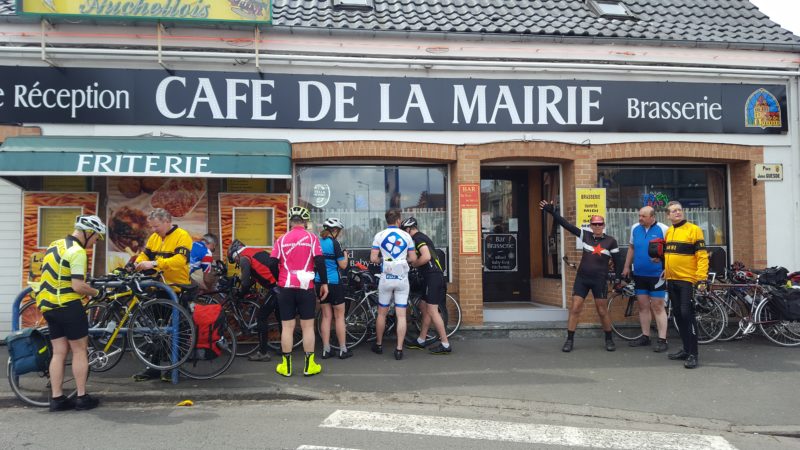 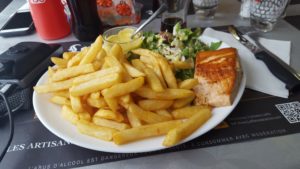 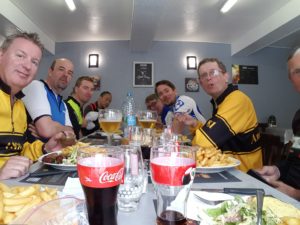 It can be a fatal mistake eating so many chips but in France, a meal takes a long time. The stretch from Auchel to Vimy Ridge is pretty hilly and some of us struggled with the constant headwind as well. Marc & Cameron took turns at the front acting as wind breaks but generally kept themselves amused by racing each up and down the hills. Should have given them some of our luggage!

A particularly beautiful hill with a sweeping bend greeted us at Fresnicourt-le-Dolmen. Mining country as you can see from the little mining cart standing in someone’s front garden. 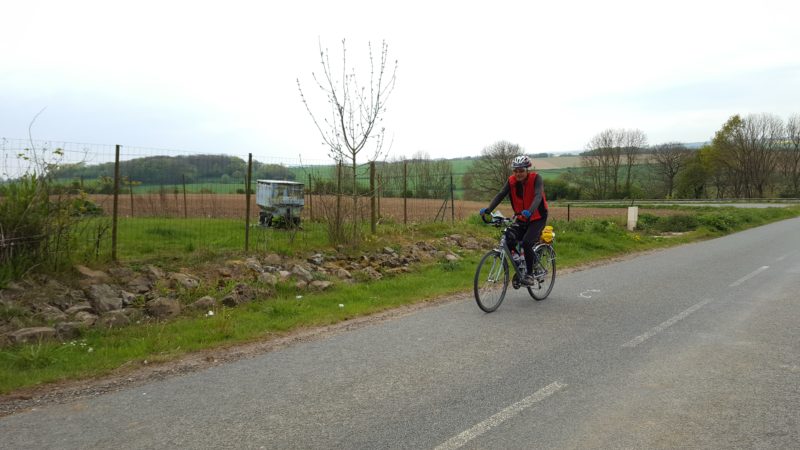 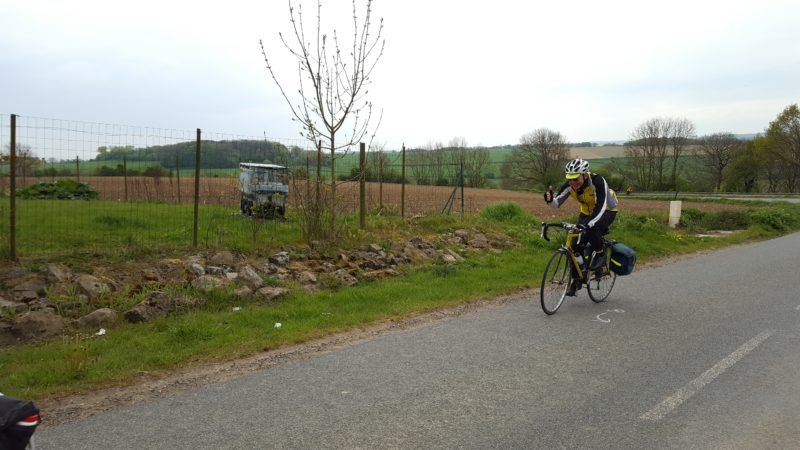 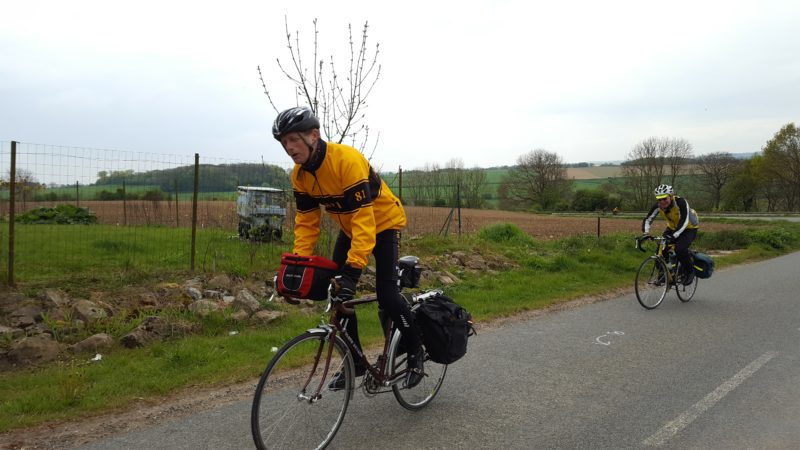 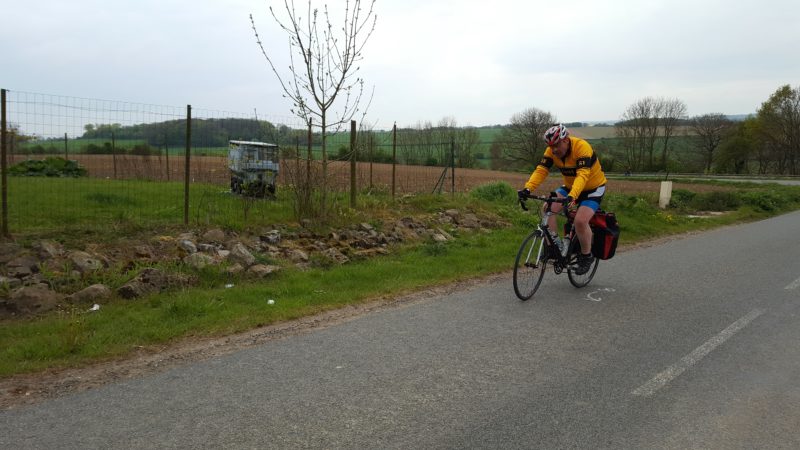 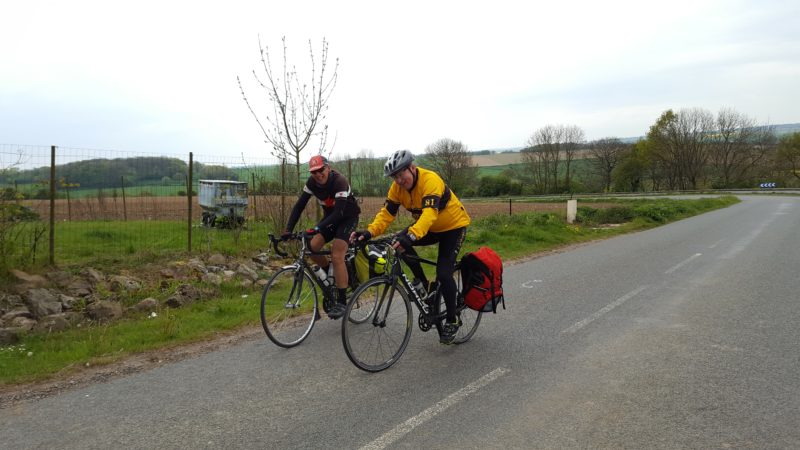 As we climbed up the ridge from Angres, the houses we passed displayed Canadian flags as a tribute to the soldiers who fought & died at Vimy Ridge. Eventually the stunning memorial appeared. 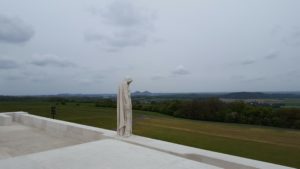 Although the signage indicated that cycling was permitted, we were told off for cycling up to the memorial. After apologising and giving a Gallic shrug we carried on to admire the beautiful artwork installed in the memorial. 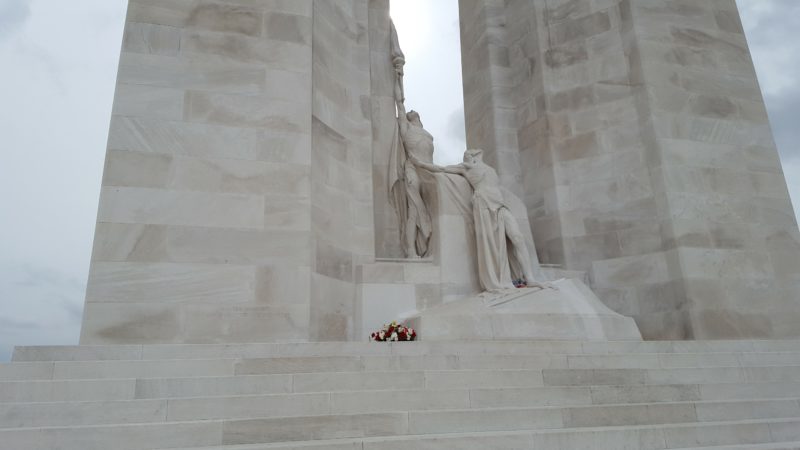 The preserved trenches were interesting, especially as they are surrounded by many, many bomb craters.

Eventually we descended into Arras passing the German cemetery on the way. Particularly poignant were the Jewish headstones dotted among the stark crosses. The difference a few years made to the German view of the Jews is truly tragic. 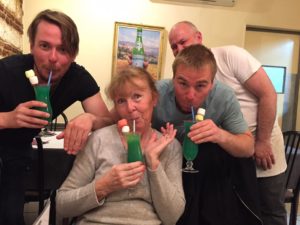 Celebrating the long ride to Arras, Denise and the “lads” ordered a blue cocktail but a green one appeared. Didn’t seem to put them off though! 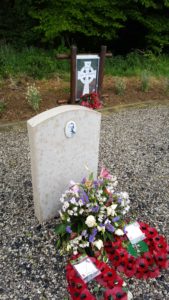 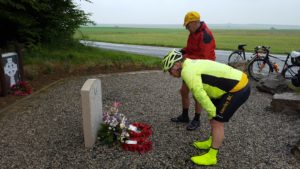 A grey, drizzly mist greeted us for the ride to Bullecourt. Not many features visible among the villages apart from the series of military cemeteries. We pulled up for a brief rest next to a memorial stone for Capt David Philip Hirsch VC.

Having arrived at the first objective, Capt. Hirsch, although already twice wounded, returned over fire-swept slopes to satisfy himself that the defensive flank was being established.

Machine gun fire was so intense that it was necessary for him to be continuously up and down the line encouraging his men to dig and hold the position.

He continued to encourage his men by standing on the parapet and steadying them in the face of machine gun fire and counterattack until he was killed.

We surveyed the battlefield before descending into Bullecourt, cycling slowly past the Digger Memorial marking the Australian losses. Arriving at Bullecourt as the Church Clock struck 11am, we laid our wreath and the group split up with the bulk heading home via the train at Arras. Frank went off with them to hopefully be reunited with his passport which was very kindly being brought over by Nina. 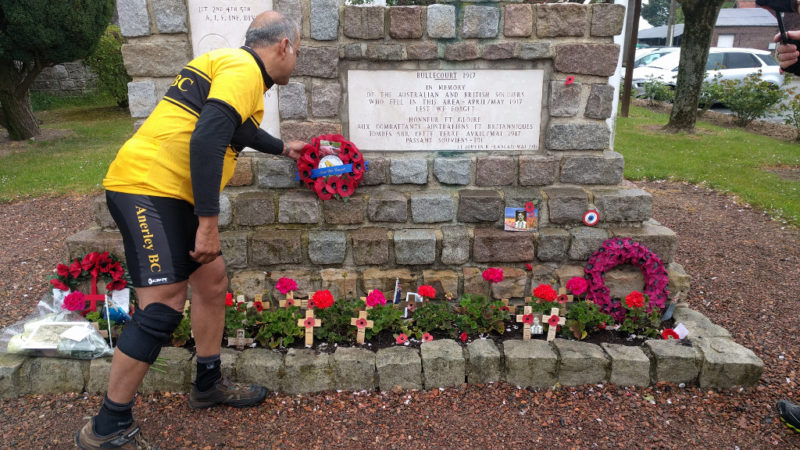 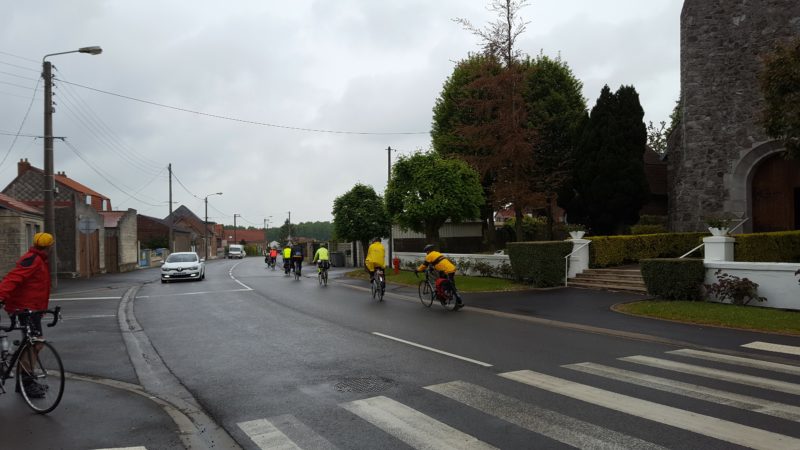 The remaining four of us continued on our mini battle tour. First off was the HAC cemetery near Bullecourt containing the remains of many of Private Calder’s comrades.

We enjoyed a great, leisurely lunch at Le Stromboli in the town of Bapaume, immortalised in the poem ‘Blighters’:

BY SIEGFRIED SASSOON
The House is crammed: tier beyond tier they grin
And cackle at the Show, while prancing ranks
Of harlots shrill the chorus, drunk with din;
“We’re sure the Kaiser loves the dear old Tanks!”

I’d like to see a Tank come down the stalls,
Lurching to rag-time tunes, or “Home, sweet Home,”
And there’d be no more jokes in Music-halls
To mock the riddled corpses round Bapaume. 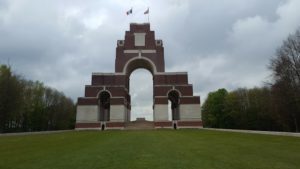 The memorial at Thiepval is a sombre affair, without the glorious artwork we saw at Vimy Ridge but the rows of sad crosses leave a mark on your soul.

We moved on around our 55 mile loop and ended at the memorial in Arras where our long missing Club Captain’s name is remembered along with many, many men whose bodies were never found or identified. 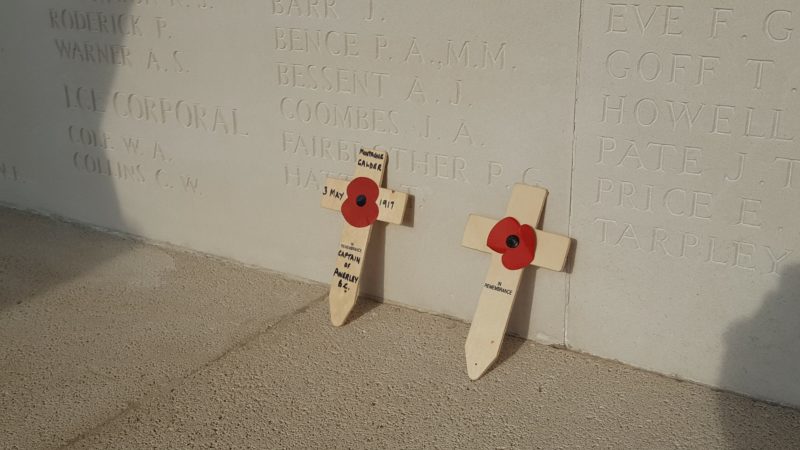 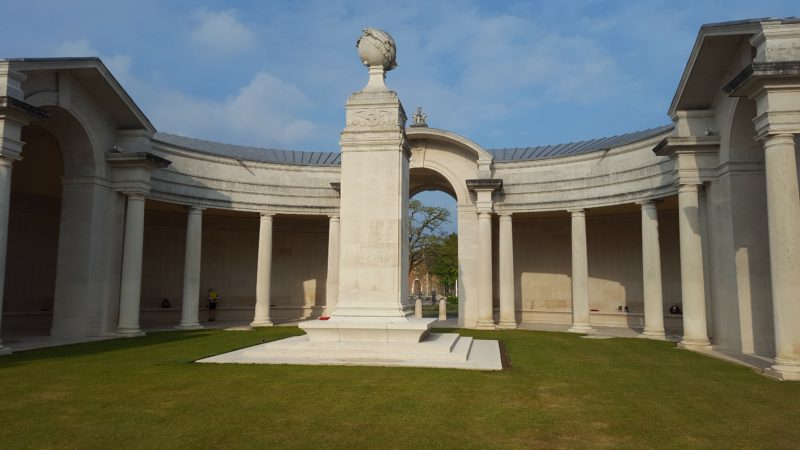 After 55 miles, it was lovely to have the day completed despite our difficulties on and off the road and I slept soundly in my bed in Arras.

As for Frank? He got home safely having been reunited with his passport at Calais. Here he is showing it to a trustworthy new friend. 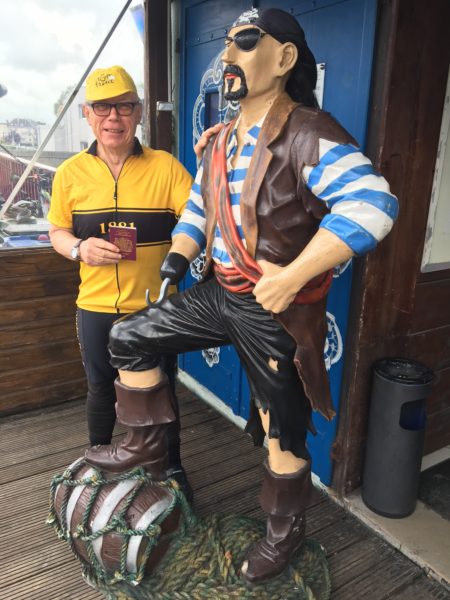