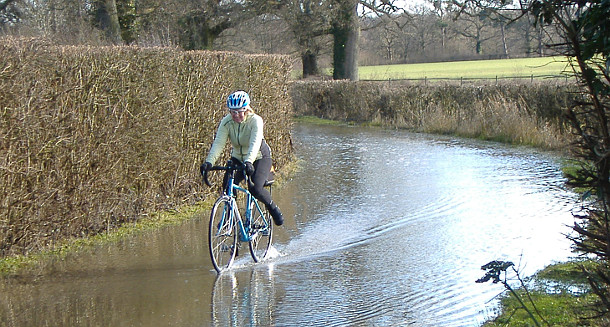 An eventful ride on a wonderful February day after the heaviest recorded winter rainfall.

Our normal starting point was occupied by a spaghetti assortment of 6″ hoses as the London Fire Brigade was busy pumping out the pond to prevent a flood. We left Croydon by Farthing Down which had a worrying patch of ice right at the top. Luckily that was the only ice we saw as Jim elected to keep to better roads past Redhill Aerodrome to Horley.

This includes a left turn which coincided with a passing police car more interested with the law than cyclist safety. We will leave that one there.

Horley Waitrose was rammed … with hordes of pesky cyclists. Nowhere to park, long queue, yep the Cheam & Morden CTC were in town. Pleasant company though and the Anerley is mentioned in their dispatches: http://cheamandmorden.blogspot.co.uk. Their March 8th Hilly 50 will be featured in this week’s Bugle.

We then pottered across to The Plough Dormansland where drinkers and non-drinkers parted company. The route back was a little soggy in places with the ABC stubbornly ignoring all Roads Closed/Flooded notices. The very last bit along the closed A22 was especially interesting. Miles and miles of hoses, dozens and dozens of fire engines were heroically attempting tp protect sandbagged pumping stations and homes from being engulfed by standing water several feet above them.

Taking the morning air with the Horley Constabulary Not taking the Horley Underpass Other methods of transport were available Julia enjoying herself too much Thanks to Tom B for last two photographs