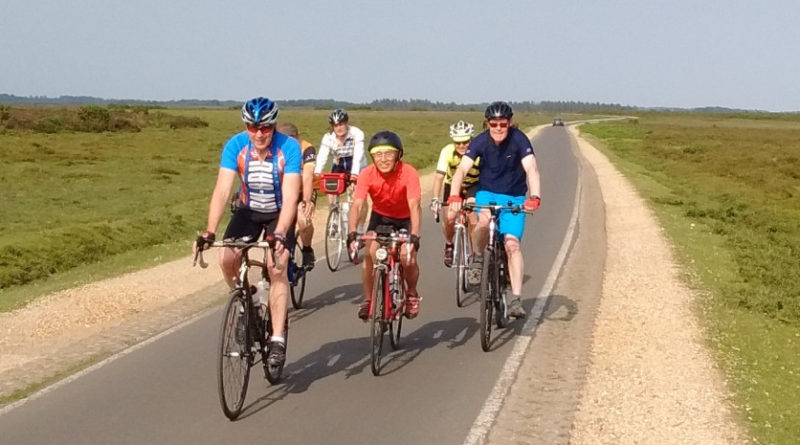 Braced for anything weather wise after conflicting forecasts and chilly weather in the first few days of June, a handsome bunch of mature ABC men met up at Fleet Services on Monday 6th June. After lunch taken from various establishments, we set off to Burgate Manor Farm near Fordingbridge just outside the New Forest. A quick stop at Sainsburys in Ringwood gave us the opportunity to stock up on provisions. After a short drive to Fordingbridge we found the farm hidden away down a hard to find track at about 3pm. The Farm and Car Park River Avon near the Farm Bridge over the Avon near the Farm

After settling in we set off for a 25 mile ride around the North East of the New Forest: Monday Evening Ride – Riders with “other” club jerseys were excluded from this picture!

Later on we ate at the local Indian restaurant.

On the Tuesday we rode to Bucklers Hard. This is a historic boat building yard where some of the ships that fought at Trafalgar were built. Most of the group went for a boat trip along the river while Peter attempted to sleep on a bench whilst being pestered by hungry seagulls. Boat Trip on the River & The ride to Bucklers Hard – about 52 miles. On the ride to Bucklers Hard

On the Tuesday evening we sampled the delights of the Ship Inn in Fordingbridge, despite having cycled over 50 miles earlier several members of the party almost collapsed with exhaustion due to having to endure the unnatural activity of walking for a mile to the pub!

On the Wednesday we were joined by Jeremy and we rode to Barton on sea, that well known flesh pot on the South Coast.
We had coffee at Barton overlooking the sea in glorious sunshine and on the way back we had lunch at the Old station in Holmesley, after a short detour to make up the mileage. The ride to Barton on Sea Coffee Break at Barton on Sea

Barton on Sea – about 71 miles The Old Station Café at Holmesley
Later on Wednesday Belinda arrived with enough superb lasagne to feed the whole of Hampshire. After a valiant effort to consume all this we had to admit defeat and retire!

On the Thursday we dashed to Lymington for the IOW ferry only to discover that the 10 am ferry we had hoped to get was fully booked. John Dadson has been signed up by the Mercedes F1 team after his epic drive to the ferry.

Both Jeremy and Belinda joined us for this ride.

The sea crossings to and from the IOW were unbelievably calm, with virtually no wind.
We set off from Yarmouth and lunched at Cowes and we returned to Yarmouth via Newport, Chale and Freshwater. We split into two groups after Newport, with one taking a short cut more directly west to Freshwater. We all reunited at Freshwater successfully. Pause for breath at Freshwater after joining up again Isle of Wight ride – About 44 miles

Unable to face the one mile walk to Fordingbridge again we went to the Indian restaurant again on the Thursday evening. The Indian Restaurant in Fordingbridge

As the newbie member I really enjoyed the trip, we had great weather, very scenic routes, many with very little traffic. Thanks to Mark for organising it, to Jim for leading the rides superbly, to Mark and Jim for planning the rides, to Sherpa Ken for carrying stuff on the rides and to Belinda for the takeaway lasagne delivered all the way from Chaldon. But best of all, thanks to everyone for being such great company on my first trip with ABC.