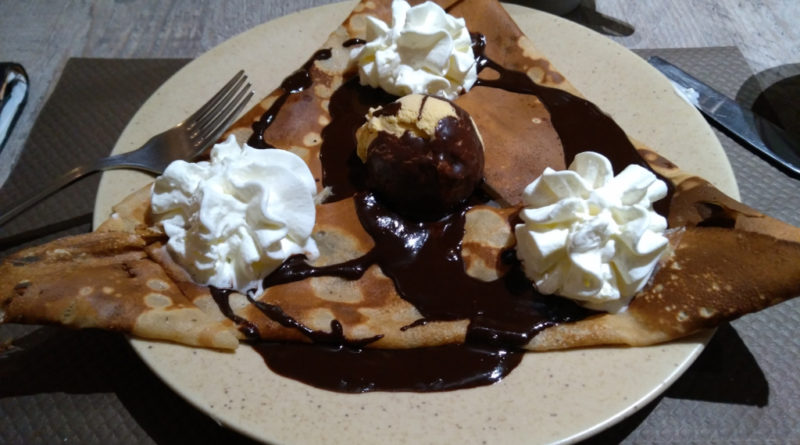 Five friends including two from the club take an early spring circular ride around Brittany. We take the the overnight ferry from Portsmouth to St Malo … 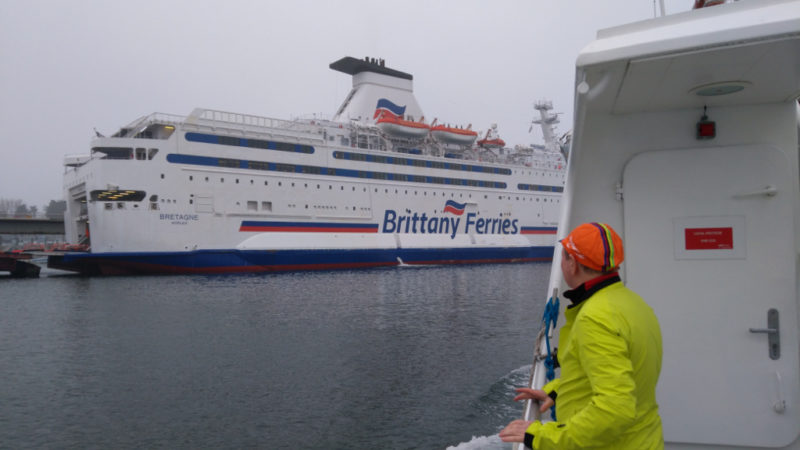 The day starts early with a cup of coffee – only 1.10 euro for a infinitely superior cup drunk al fresco below the city walls before taking another ferry [above] to Dinard to avoid a nasty busy road bridge.

We were soon on a voie de verte [an old railway track] snaking south. We took an ill advised D-road which was rather truck heavy until we reached the town museum of famous tour cyclist Louisson Bobet. The curator aplogised that all the information was in French but did give superb directions to take a rather more pleasant ride through the country to Ploermel. 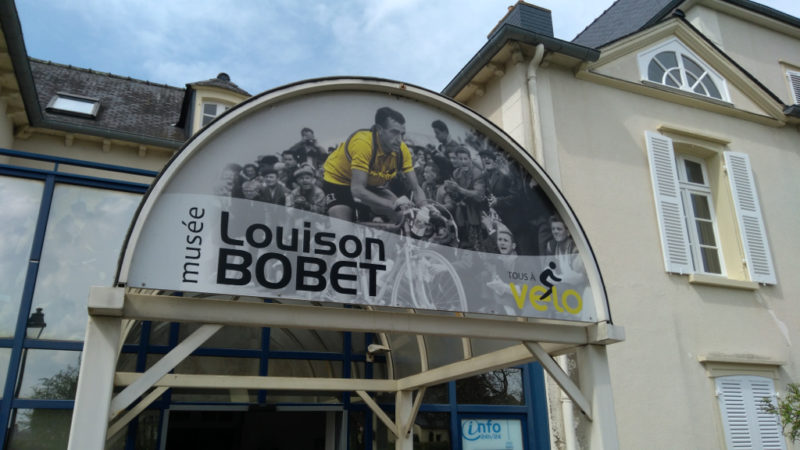 The toughest day but we had encountered some spectaculary beautiful small towns, boulangeries and patisseries. So all was well when we checked into a rather grand Golfing Hotel. Except we had hired a chalet in the grounds which took all five of us and had a kitchen to cook our firsdt meal liberally lubricated by du vin from Monsieur LeClerc. 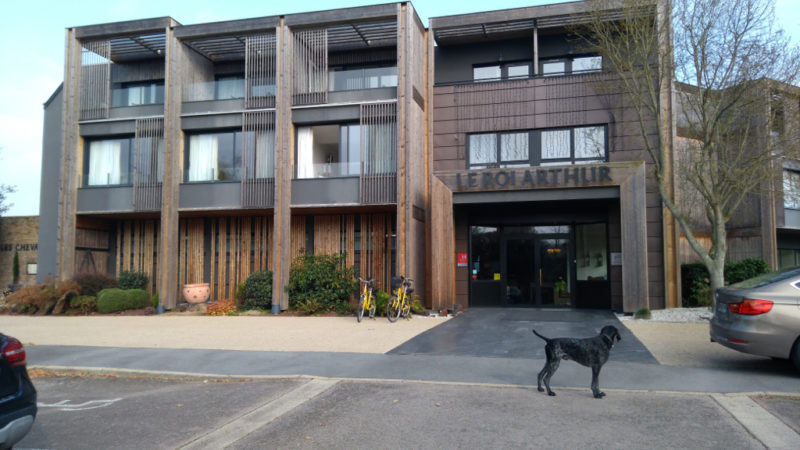 An easy day continuing south continuing on one of France’s excellently converted railway reacks with superb surfaces and a bench every 500 metres. Crossing rivers and canals with spring bursting forth around us. 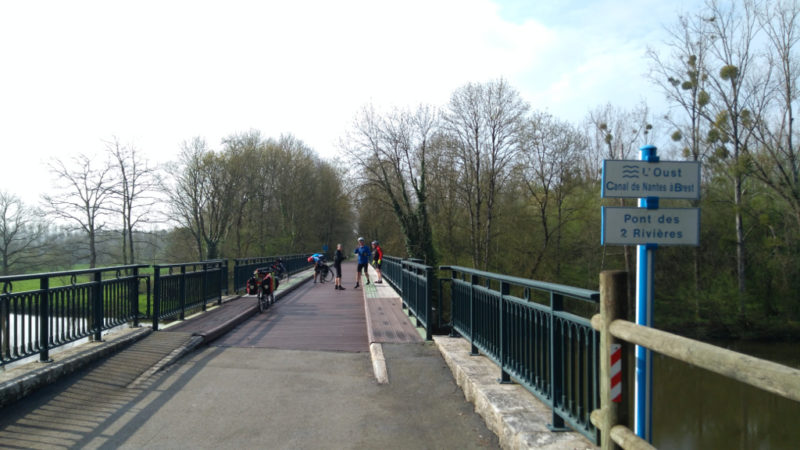 Here we all are in the main square of Questenbert after lunch & wine. What you can’t see are two drug pushers who tried to market their wares to us. Looks like Sky’s reputation has reached even the backwaters of western France where any British rider looks a likely hit. When I say British – it was one Jew, one Muslim, one Welshperson, one Irish and one English. Diversity gone mad! 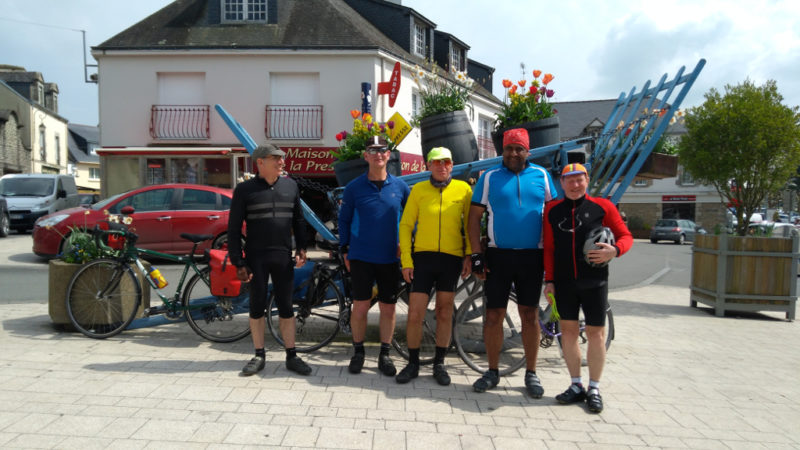 Our arrival in Vannes was marred by the puncture fairy. That fixed – a spoke broke on another bike before we re-started. Quick dash around town to find a shop before they closed to get a replacement spoke. That done and being very unimpressed with an horrific rush hour along the main drags before we found liquid and solid solace in the quaint streets of the old town.

Day Three: Vannes to Auray and back to Vannes 41 miles

We had decided to spend two nights in Vannes so we could do a day ride without panniers. Auray – another photogenic town was our destination. Not far out of Vannes we turned a corner and VOILA! there was the Gulf of Morbihan – a huge jaw dropping natural harbour. Or to be precise a set of harbours abounding in islands and inlets. 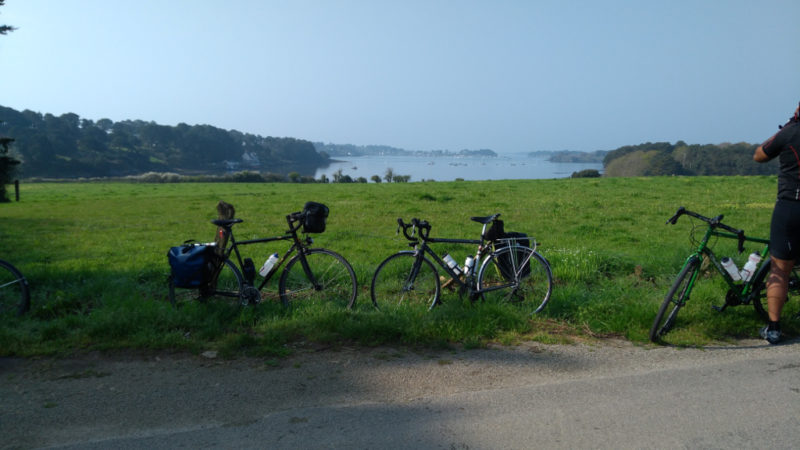 And this is lower Auray where we had lunch and were pleasurably attacked by mad pink ladies. 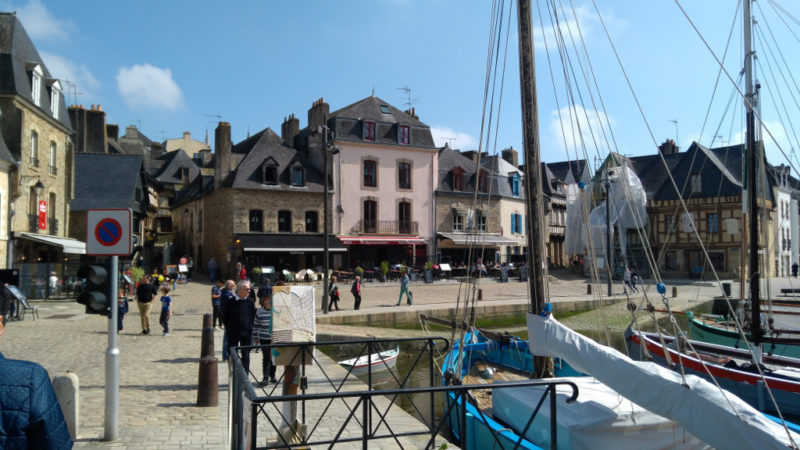 The beginning of the return to St Malo. An early puncture in the same tyre as marked our entry into Vannes and probably caused by the same little nasty metal pin completed our ‘technicals’ for the ride. Just three in 1,500 miles between five laden bikes. Not bad.

Our first stop enabled TomTom to get his head around some French literature. This was one booth of many we spotted in village squares where people exchanged books. A very effective and inexpensive library service: 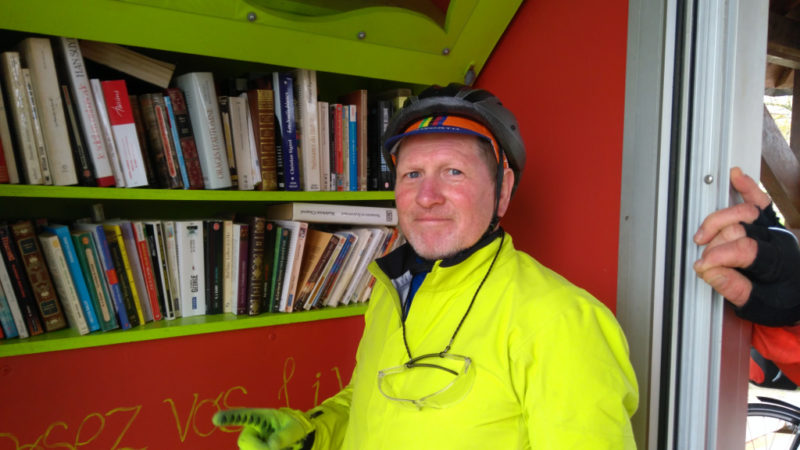 This was a small diversion from the canal we followed north most of the day. Here TomTom moves moves his admiration from literature to sculpture: 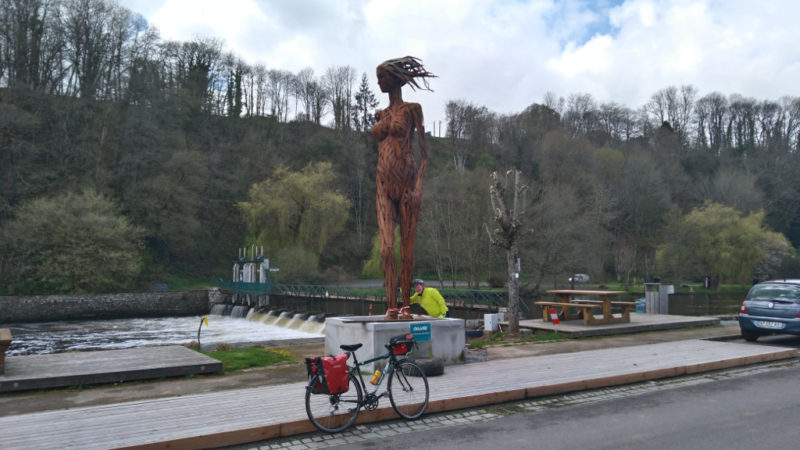 Pontivy was a sleepy little town but with a creperie to die for. This was a small dessert: 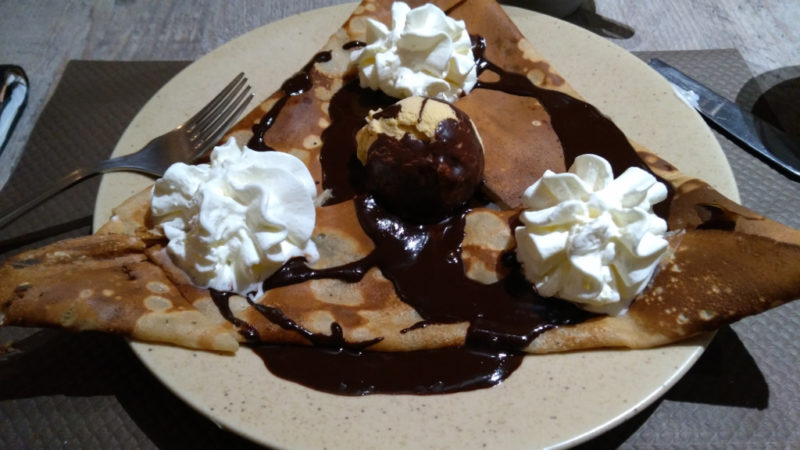