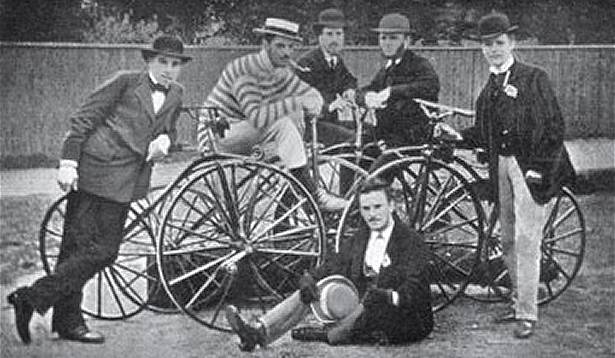 Pickwick Bicyclists on a club run in 1870

The first pedal powered bicycles were developed in France during the 1860s as the velocipede.

Within ten years bicycle clubs were being founded throughout the UK. Many existing clubs claim to be amongst the oldest in the UK including us. But who really is the oldest? Here is a list of those who claim to have started before 1881 – the year of Anerley BC’s foundation.

CTC (Cyclists Touring Club): 1878
Except they have dropped ‘Club’ from their title and now morphed themselves into “the UK’s National Cyclists’ Organisation”. So I don’t think they qualify in the sense of being a continuing cycle club in our sense.

Pickwick Bicycle Club – Hackney Downs: 1870
No known website and (according to The Independent) nowadays it is mainly a social club with membership by invitation so probably does not qualify as an active cycle club

Please comment below if you know of any existing pre-1881 club and we will add them to the list.